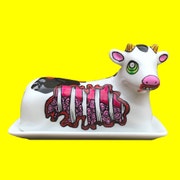 Illustrator of dinosaurs, monsters and stuff.

DixonDoesDoodles is taking a short break

Note from shop owner Hello!
I've shut my shop but only for a week and a bit. I’ll be back open and ready for business on the 18th August.

Hello!
I've shut my shop but only for a week and a bit. I’ll be back open and ready for business on the 18th August.

I draw, paint and scribble on plates. Life is good.

As a kid I would draw dinosaurs and monsters, as a teenager I would draw comic book style violence and mayhem, as a twenty-something I drew people and in my late twenties I didn't do any drawing. It's o.k though, as a now thirty-summat aged father of three I draw, scribble, print, make ALL the time.
It's taken me a long time to show work to people, but after much pressure from loved ones I've started to put my scribbles out into the world. It's going well and really what's the worst that could happen?

If you are unhappy with your purchase you can return it as you received it, you will be liable for the return shipping costs. When received by myself I will issue a refund of your original purchase amount.

When you have purchased one of my items payment needs to be made within 5 days. If payment is not received within this limit I will cancel the sale.

As soon as I've got your order ready I'll send you email notification letting you know your doodles are on their way!

UK - Please allow up to 5 working days after dispatch for your order to arrive. It's usually around 1-2 working days.

I have an option for you to pay a little extra for tracked postage to ensure safe delivery. If you don't go for tracked shipping and your order doesn't arrive I cannot be held responsible for its loss in transit BUT I'll do everything I can to help and resolve any problems.

International - Please allow 15 to 21 working days after dispatch for your order to arrive.

Please make sure you check your address is correct before ordering. I don't want someone else getting your doodles!

If you have nay questions regarding postage, such as why hasn't my package turned up, combined postage,etc then drop me a line.

If you have any problems regarding your awesome order please don't hesitate to contact me via Etsy and I'll do my very best to help you.
I don't include receipts with my orders as you've already got an electronic one. Every little bit to save paper, resources and waste.

We rely on a number of legal bases to collect, use, and share your information, including:
• to provide our services, such as when we use your information to fulfil your order, to settle disputes, or to provide customer support;
• when you have provided your affirmative consent, which you may revoke at any time, such as by signing up for our mailing list;
• if necessary to comply with a legal obligation or court order or in connection with a legal claim, such as retaining information about your purchases if required by tax law; and
• as necessary for the purpose of our legitimate interests, if those legitimate interests are not overridden by your rights or interests, such as 1) providing and improving our services. We use your information to provide the services you requested and in my legitimate interest to improve my services; and 2) Compliance with the Etsy Seller Policy and Terms of Use. We use your information as necessary to comply with our obligations under the Etsy Seller Policy and Terms of Use.

Information about our customers is important to our business. We share your personal information for very limited reasons and in limited circumstances, as follows:
• Etsy. We share information with Etsy as necessary to provide our services and comply with our obligations under both the Etsy Seller Policy and Etsy Terms of Use.
• Service providers. We engage certain trusted third parties to perform functions and provide services to our shop, such as delivery companies. We will share your personal information with these third parties, but only to the extent necessary to perform these services.
• Business transfers. If we sell or merge the business, we may disclose your information as part of that transaction, only to the extent permitted by law.
• Compliance with laws. We may collect, use, retain, and share your information if we have a good faith belief that it is reasonably necessary to: (a) respond to legal process or to government requests; (b) enforce our agreements, terms and policies; (c) prevent, investigate, and address fraud and other illegal activity, security, or technical issues; or (d) protect the rights, property, and safety of our customers, or others.

We retain your personal information only for as long as necessary to provide you with our services and as described in our Privacy Policy. However, we may also be required to retain this information to comply with our legal and regulatory obligations, to resolve disputes, and to enforce our agreements. We generally keep your data for the following time period: 7 years.

For purposes of EU data protection law, Jonathan Dixon is the data controller of your personal information. If you have any questions or concerns, you may mail me at:
Jonathan Dixon, 6 Cooperation Road, Bristol, BS5 6EQ
See this Seller Handbook article for a sample privacy policy you can customize for your shop.

I do do Wholesale! Send an email to dixondoesdoodles@gmail.com and I can send you my catalogue.

I do do custom things. It all depends on what you're after but I'm sure I can help!