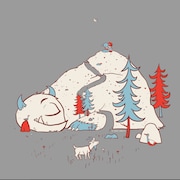 Handmade plush toys for the young at heart!

dkoss2 is taking a short break

Note from shop owner My shop will be on vacation while I move my studio. Please feel free to message me with any questions you might have. Thanks so much for your patience!

My shop will be on vacation while I move my studio. Please feel free to message me with any questions you might have. Thanks so much for your patience!

The birth of a monster maker.

Diane Koss is the owner, designer, and creator behind the one woman army of plush monsters that is Cutesy but not Cutesy. With a burning need to make use of her idle hands, her love of all things fuzzy, and her mild obsession with antlers, the first monster was born in 2007. Inspired by her grandparents’ stories of stitching by hand, she holds true to tradition and stitches each one with just a needle and thread without the use of any machines. Diane has been hand-stitching hundreds of one-of-a kind monsters to send off on small (and large) adventures of their own ever since.

When not burning the midnight oil in the monster warehouse just outside of Philadelphia, Diane can be found traveling the country with her monster army close behind to various craft shows and galleries. She’s since expanded her line to include monster hoodies, t-shirts, baby onesies, dishware, and more.