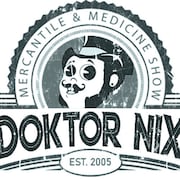 DoktorNix is taking a short break

Note from shop owner We are currently closed due to heavy day time work loads leaving us with no time for production. We will hopefully be able to re-open soon, but hope you will be patient with us.
Please message us with any custom items you may need or any questions. We will get back to you as quickly as possible.

Your humble crafts persons and shop keeps,
Nix and Terana

We are currently closed due to heavy day time work loads leaving us with no time for production. We will hopefully be able to re-open soon, but hope you will be patient with us.
Please message us with any custom items you may need or any questions. We will get back to you as quickly as possible.

Your humble crafts persons and shop keeps,
Nix and Terana

Oddities made by the very odd

Like attracts like, as they say, and the Doktor and Terana are quite alike in many ways. Mostly strange and sometimes disconcerting ways.
The two met under circumstances far too complex and otherworldly to mention here on a date which seems lifetimes ago, now. Since then, however, they have inspired each other and conspired together to create art, jewelry, clothing and general mischief.

Both craftspeople of small stature, they are easily underestimated and assumed to be fairly harmless. This has allowed them access to many wonderful and dazzling locations, groups, and circles from which to learn and grow while practicing their skills and selling their wares.

Today they live and work in Asheville, NC; a mountain town as inconspicuously bizarre as they are. There they ply their trades and commune with forgotten subterranean entities for inspiration and archaic secrets. Arcane knowledge you can count on being woven into each hand crafted piece you might acquire from this pair, for better or worse.

Last updated on May 9, 2022
The Mercantile deals in found oddities, restored treasures, and handmade wonders. Whether you seek unique curios, handcrafted chain jewelry, or customized housewares, we can more than provide!

If an item arrives damaged or broken, or if an item breaks during normal wear, please contact me. We will discuss refunding, repairing or replacing the item.

Payment is currently accepted via paypal and money order. Orders can not be canceled once they have shipped and often ship within 48 hours.

Asheville, NC locals may also note me, if interested in an item, and can pay in person via cash or credit, without paying shipping or waiting for delivery.

Unless otherwise requested, all products are shipped via USPS with either standard or priority, based on shipping distance and weight. Orders can be combined to save on shipping costs and shipping can be upgraded to expedited USPS or UPS shipping methods at the buyer's request. Upgraded shipping costs will be added to the client's bill.

Asheville residents can choose 'other' for shipping if you wish to pick up your order or have it delivered in person.

Most items can be re-created or altered, unless otherwise noted. Feel free to note us about modifying an item, making a custom version, or if you would like a duplicate of an item (sold or otherwise).