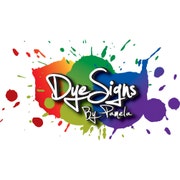 Making the world a more colorful place, one scarf at a time!

DyeSigns By Pamela, Inc. has become quite the buzz these days. At the helm of this Louisville, Kentucky based business is distinguished Artist, DyeSigner, and CEO, Pamela Mattei. Known for her eye-catching sense of color, hand dyed silk scarves, big dreams and unrelenting determination, Pamela has transformed her small business into a national and international brand. A juried artist with the Kentucky Arts Council’s Kentucky Crafted program, DyeSigns By Pamela’s silk scarves are hand dyed a spectrum of rich, luscious colors sure to complement any wardrobe. DyeSigned to adorn and sure to accessorize in ways only art can: In Style!

Pamela has enjoyed exploring the fibers medium since she was a little girl. Introduced to a plethora of art camps as a kid, Pamela was drawn to any class that involved fibers. From weaving to sewing, if it was fabric-related, she was a happy camper. One summer Pamela took a week-long sewing camp and two years later gave up a trip to Walt Disney World in order to take a week-long advanced sewing camp. As a middle school student, Pamela was thrilled to receive a sewing machine for Christmas and asked for (and received) a serger a few years later. What kind of kid does those sorts of things? One who is destined to become an artist!

While in high school, Pamela was inspired and mentored by world-renowned fabric artist, Penny Sisto. After spending the day in Sisto’s studio, Pamela went home and professed to her parents, “I know what I want to be when I grow up. I want to be a fabric artist!”

Pamela went on to attend and majored in Art with a concentration in Fibers and minored in Business. It was during college when Pamela really became passionate about dyeing fabric.

After graduating, Pamela immediately became an ART-trepreneur and started developing her own art business. She loved to dye fabric and dyeing scarves was something she enjoyed doing and could sell to make a living. Pretty soon “DyeSigns By Pamela” was born.

Over a decade later her artwork can be found in over 150 galleries, museum gift shops, boutiques, and specialty shops throughout the nation. From Maine to California, Florida to Alaska, and many, many places in between DyeSigns By Pamela are sold in 37 states across the United States and Canada.

Pamela has won over 100 awards for her artwork and finished first runner up in The Crafts Report's 2013 Cover Contest. Her work has been featured in five issues of The Crafts Report magazine as well as The Courier-Journal newspaper, Today's Woman magazine, and many others. Mayor Greg Fischer proclaimed the entire month of October 2013 to be “DyeSigns By Pamela, Inc. Month” in Louisville, Kentucky.

But visual art is not the only art form in Pamela’s life. When she is not driving the pedal of a sewing machine or turning her skin different colors while dyeing her own fabric, Pamela enjoys spending her time working with the performing arts backstage in the theater as a freelance Stage Manager and Production Assistant for a variety of local events and ceremonies. She also use her artistic talents as a dresser on the wardrobe crew for countless Broadway Series and other touring productions including Wicked, War Horse, Jersey Boys, Dreamgirls, and the Rockettes and has worked as a seamstress for The Phantom of the Opera and as a costume painter for Disney’s The Lion King. Pamela has also worked a variety of concerts with music legends and superstars including Cher, Prince, Diana Ross, Tim McGraw and New Kids on the Block.

Pamela is based out of Louisville, Kentucky where she dreams, dyes, inspires and continues to make the world a more colorful place, one scarf at a time.

Last updated on April 29, 2022
Welcome to my online boutique! My scarves are available in over 150 galleries in 37 states and Canada. If you want to shop in person, I invite you to find a gallery near you on my website at http://dyesignsbypamelainc.com/where-to-shop/out-of-state-galleries/

My art is created in my Kentucky studio. All of my scarves start out white. I mix my own dyes from powder into liquid and personally hand dye each scarf. My scarves are available in an eye-catching spectrum of colors that is To Dye For!

I dye hundreds of different colors every year so my color palette is constantly changing adding to the uniqueness of each individual scarf. Colors will vary in intensity and shade and help make each scarf one of a kind.

Before you order:
-If you have any questions or concerns about the item, please ask prior to ordering. I'll do my best to answer or to help make the best scarf selection for you or a gift.
-Be aware that colors may appear slightly different based on your computer monitor settings, but the item photographed is the item for sale.
-Please know that color variations that may appear on a scarf is a natural part of the dyeing process and a characteristic of it being a hand made and unique and should not be seen as a flaw or defect.

Returns:
-If you are not happy with your purchase for any reason please let me know so I can try to address the problem.
-If you would like to return the item, it must be sent back to me within 14 days of delivery in the unworn and new condition it was sent to you in. It is highly encouraged that you add tracking to any return shipment.
-Returns must be sent in a padded envelope or a box to protect it from damage.
-Your refund will exclude the shipping costs and a 10% restocking fee.
-Once returned, please allow up to 14 days for a refund to your account. If the order is returned during a shipping black out time (as listed in my Shipping Policies), please allow up to 14 days after the black out dates for a refund to your account.

Losses:
-If your order does not arrive please contact me so I can track the package and find out its whereabouts.

Damages:
-Hand dyed Items are one of a kind.
-If somehow an order is received damaged please be aware that I may not be able to replace the item(s) for an identical product as no two are exactly alike.
-If an item is received damaged, please contact me and I will exchange the item for an equal priced item once the item has been returned and inspected.
-Damaged items must be sent back to me within 14 days of delivery in the unworn and new condition it was sent to you in. It is highly encouraged that you add tracking to any return shipment.
-Damaged items must be sent back in a padded envelope or a box.

I accept credit cards (Visa, Master Card, Discover, and American Express), debit cards, and Etsy gift cards. All orders must be paid in full prior to shipping.

6% sales tax will be charged automatically to customers in Kentucky.

All orders ship with tracking, delivery confirmation, and insurance included.