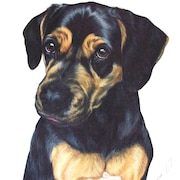 EmmasBestInShow is taking a short break

Note from shop owner Please contact me at emmasbestinshow [!at] gmail.com for information

Please contact me at emmasbestinshow [!at] gmail.com for information

The Show Ring; in a Portfolio

Welcome to the show ring and thanks for stopping by my shop!

To draw all of the AKC recognized breeds? Not just sketches, but dogs that could win Best in Show at any and every dog show? Dogs that would take hours of careful, artistic design to make beautiful?

Yes, and I still held to that commitment of perfection up until the moment I signed my name on the last breed. I was fully devoted to seeing each dog as worthy enough to become Best in Show and seeing the project complete December 31, 2013, I know it was worth it! Two years, 189 individual drawings, innumerable pencils, even more pencils shavings, and a whole lot of commitment later, this project is complete.

These dogs took longer then I anticipated, but equally they became so much more then I ever thought possible. God has blessed me so abundantly with a talent and love of drawing dogs, and I thank Him alone for it. Without His guiding Hand, I would never have come as far as I have. It is His power, not mine, which has allowed me to continue on and to complete it.

Here at Emma's Best In Show, it is my goal to represent each AKC recognized dog breed in accordance with the Breed Standard. Each piece of art took careful crafting to fully convey the written Standard of perfection.

My prints are made to order. When you purchase a piece of art I will have it printed and shipped out no later then four business days after purchase.