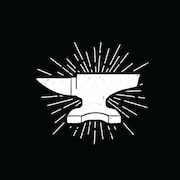 FirestormForge is taking a short break

Note from shop owner Anticipating reopening in the fall of 2021

Anticipating reopening in the fall of 2021

My journey from the Renaissance Fair

I started blacksmithing in 2005 at the age of 14 at a renaissance fair. I hung around the blacksmiths booth and talked with him for several hours, and he eventually let me come in and make a few things. Shortly after that I tracked down a forge, and the blacksmith at the renaissance fair gave me a 'starter anvil' (a small piece of railroad track). Ever since I've lit the forge on a regular basis, gotten new tools, learned new things, made some mistakes and learned from most of them. I learned how to arc weld at 17 and have since incorporated that into some items, though I prefer to use 'traditional' joinery methods if it's not too inconvenient.

Last updated on May 9, 2022
Hello and welcome to the Fire Storm Forge Etsy shop. All items sold here are forged entirely by hand. The only time I use power tools is before or after the forging, either cutting, welding or drilling it. Everything else is done by hand with hammers, tongs, hardies and some elbow grease.

All sales are final except in the case of the item being structurally damaged or incorrect upon receipt. Make sure the item you're ordering will work for what you intend. If you have any questions or concerns about the size or weight or something else regarding the item please email me.

All of my items are made to order and will take a little time to get shipped out. They are also all hand made, so there will be a bit of variation from item to item. It may at times take up to 2 weeks to ship an item.

My items are all made of steel, and all steel will rust at some point. Keeping them away from water, high humidity, frequent handling and not outside will help inhibit rust, but it won't prevent it. Depending on the finish chosen touch up methods will vary, but generally removing the rust with steel wool and reapplying whatever finish was used will suffice. Contact me with any further questions.

Steel is a heavy material, and the larger stock weighs much more then smaller stock. One 12" piece of 1/2" square will weigh four times as much as one 12" piece of 1/4" square. If you have any questions or concerns about the weight or size of an item please contact me. I will be able to get you an exact weight/size of the item so you can ensure it will meet your needs.