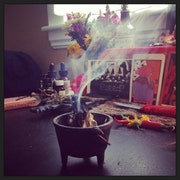 Hello! My name is Miel Rose. I was given that name at birth by my father, named for the golden magic of honey and after my grandmother. I am a queer witch. A wounded healer. A textile artist who finds so much joy in creating sacred textile magic. A writer who is currently gestating. A navigator of chronic illness and CPTSD.

I've been working with plants as medicine and practicing feminist spirituality for 20 years, although I was shaped by these forces much earlier. I was raised on herbal remedies, grown and made by my parents, and came into awareness of myself as a witch at the tender age of 11. After moving to the Pacific Northwest at 17, I started studying medicinal plants in earnest, first on my own and then with teachers such as Cascade Anderson Geller, Krista Olson, and Colette Gardiner. After completing Colette's 400 hour professional herbalism course, I was privileged to participate in the first year of the Blue Iris Mystery School in 2005, a 4 year magical training program lead by Colette Gardiner and Pomegranate Doyle.

Since 2011, I've been teaching about earth-centered spirituality and magic skills in so called Massachusetts on the unceded land of the Pocumtuc and Nipmuck peoples. My practice and teachings are rooted and centered in queer and women’s mysteries, Goddess worship, and European pagan/witch traditions. Within that, my tradition and practice is very eclectic and anarchic. When I say eclectic, I mean that I believe in a living and evolving tradition that incorporates surviving pieces of old witchcraft and newer traditions practiced by my teachers (Reclaiming Collective and Faerie), and is held together, fed, and dictated by a deliberate and active relationship with Spirit. When I say anarchic, I speak of a focus on cultivating trust in your individual authority and learning to participate in ritual within the context of a peer group that shares power.

I was raised with a strong anti-capitalist/anti-consumer ethic, which is to say I believe in cultivating reciprocal relationships with the world around us vs. seeing the world as inert matter for our consumption. I believe in an intersectional view of systemic oppression, which is to say that I believe we are living with in the death throes of a soul eating civilization whose main expressions are rape culture, colonization and genocide, white supremacy, hatred for queerness and gender variance, life destroying class disparity, and general ecocide, all of which are interlocking tentacles of the same beast. I believe that it is impossible to survive in this system without accruing some form of trauma, that personal traumatic happenings are related to systemic oppression, and that a “culture” that is based on systemic oppression is traumatizing in and of itself. I believe in centering trauma in my magical work, and that committing to the process of healing our trauma is a magical act. I believe that the Burning Times and the destruction of the matrilineal Indigenous cultures of Europe were test runs for the genocidal colonization of the Americas, that we all are still living out the repercussions of that drastic shift and everything that came after. I believe that folks who benefit from the current white supremacist system have an obligation to look to that part of our history and do everything in our power to heal. I believe that humans lived in deep connection and relationship with their surroundings and each other for waaaaay longer than patriarchy/white supremacy/ecocidal domination have existed. I believe we can do that again.