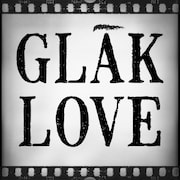 GlakLove is taking a short break

Note from shop owner Thank you so much for supporting this lil business for so many years. We have closed shop, most likely indefinitely, but we had so much fun.
"I Am So Happy You're Here"
Angelyn

Thank you so much for supporting this lil business for so many years. We have closed shop, most likely indefinitely, but we had so much fun.
"I Am So Happy You're Here"
Angelyn

I began working with film as an actress, performing in short films and commercials for years. It was my first love, and like so many others I struggled to make a living pursuing the craft until eventually conceding that I needed a "real" career. So I went to work in advertising...and quickly became frustrated and depressed.
It was during one of these frustrated/depressed spells that I took a bottle of wine up to my loft and decided that if I could no longer devote the time needed to perform in film, then I would cut film up and make it do what I wanted it to do. I began by cutting birds and other little objects out at random and placing them on panes of glass. But as I went through shoe boxes of old negatives, I started to become entranced with the captured moments from my past ingrained in each frame, and how I could tangibly change the moments from my past through these film negatives by rearranging them to form something completely different.

Glaik: noun \ˈGlāk\ an archaic Scottish word describing either the transience of a glance or a complete fool.

Glāk Love is about falling completely, foolishly, head over heels in love with those single, transient moments captured on film. We take these moments, deconstruct them and then use them as a medium to form new images. We call this method Celluloidic Artistry.
(smile)