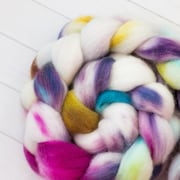 One thing lead to another...

It actually started in 2009. I stopped being the wake up early, grab a cup of coffee, and head to the "office" gal. I was pregnant with my third baby and was officially a stay at home mom to two children, a daughter and a son. I needed something to pass my time so I became crafty!

I started out making tutus and hairbows.... what else would you do when your daughter is 3? That opened the doorway, otherwise known as ETSY!! I made a pretty good profit doing hairbows and tutus, but I wanted to venture back to something my mother taught me years ago... crochet.

I began crocheting hats, which lead to knitting, which lead to handspun yarns. After watching a few too many youtube vids, I figured it was something I could try.. and try I did... and I fell in love! Spinning has been the best craft/art that I could have ever come across. I have met some of the most wonderful people in this business, some that have become really close, true friends. I don't see myself ever stopping. ;)

Last updated on May 9, 2022
I fell in love with spinning in the beginning of 2010. I started on a drop spindle and a few months later began spinning on my Kromski Prelude saxony style wheel. I love funky art yarns and thick and thin yarns. If you would like me to do a custom order for you, please feel free to convo me so we can work something out.

Payment is accepted through paypal and direct checkout. If payment is not received within 72 hours your purchase may be cancelled.

Order processing time for ready to ship items is 1-3 business days. If you have a time sensitive order, please contact me right away.