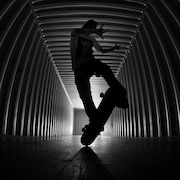 jgrantbrittainphotos is taking a short break

Note from shop owner Shooting skateboarding for over 40 years! Visit jgrantbrittainphotos.com to view and purchase my vintage and recent skateboard photography.
My book, “PUSH—J Grant Brittain—80s Skateboarding Photography, is available at Gingkopress.com, many skate shops, and booksellers all over.
Thanks for your interest—enjoy the ride!
Instagram: jgrantbrittain
Facebook: J Grant Brittain

Shooting skateboarding for over 40 years! Visit jgrantbrittainphotos.com to view and purchase my vintage and recent skateboard photography.
My book, “PUSH—J Grant Brittain—80s Skateboarding Photography, is available at Gingkopress.com, many skate shops, and booksellers all over.
Thanks for your interest—enjoy the ride!
Instagram: jgrantbrittain
Facebook: J Grant Brittain

I have been shooting skateboarding from 1979 to the present and see no end in sight.

I started shooting photos at the Del Mar Skate Ranch in 1979 while I was working there as a worker bee and eventually as the pro shop manager. I had watched the top photographers of the 1970s come through the skatepark with various pro skaters in tow and admired their work in the magazines months after they shot the photos. After borrowing my roommate's camera in February of 1979, I was immediately hooked on shooting. I honed my photographic skills by shooting my friends flying out of the cement bowls over the next few years.

In 1983 I helped found Transworld Skateboarding Magazine, and many of the photos you see in my store were featured within the covers of TWS over my 20 years as Senior Photographer and Photo Editor. My photos were on 60+ covers over that time.

In 2003 I decided to leave TWS with friends and start The Skateboard Mag where I worked until 2016.
I have since left TSM and am a freelance photographer, curator and teacher. I am currently working on a book project of my skateboarding photography.

My skate photos have been featured in magazines, books, and photo shows around the world.

You can pay with your credit card or paypal. Etsy's payment system is secure and your information is private.
Paypal takes credit card payments without an account as well as through a Paypal account.

I ship safely packed, rolled up in a strong cardboard photo tube.
Photos will be shipped within 7-10 days of your order.

International orders:
The customer is responsible for all customs fees or other taxes. Please watch for notices from your postal service. All shipments are via the postal service to avoid large brokerage fees.

I can't mark an item as "gift" on the customs form.