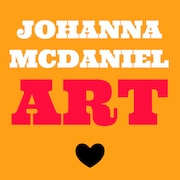 The Happy Art of Johanna McDaniel

johannamcdanielart is taking a short break

Note from shop owner Currently on a mental vacation for the next month.

Currently on a mental vacation for the next month.

Johanna McDaniel - Artist On The Side.

Born in 1987, Johanna was born and raised in Texas and lived there with a brief blip in beautiful Upper Left USA - Seattle, WA.

Johanna has pursued drawing & painting since she was about 8 years old but was never formally trained in any way until college. Johanna earned her BFA in Watercolor painting in 2009 from the University of North Texas. In 2013 she hosted art lessons for children out of her home. In 2014 Johanna & Her family moved to Seattle, Washington, but have since moved back to Denton, TX Fall of 2015.

Johanna loves gardening, and cooking, and most things food-related. She loves being outdoors, wool socks, and scifi.

Her current favorite TV & movies are: DC & Marvel series, Broadchurch, and anything Miyazaki

Her favorite colors are gold and orange.

Her current favorite food is tied between Pizza with Eggs & Arugula to Homemade Cheeseburgers.

She thinks that being a mom is the best thing to ever happen to her.