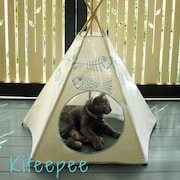 Kiteepee. Lifestyle Solutions for your Pussycat

Kiteepee: Lifestyle Solutions for your Pussycat

I began this shop in November 2013. I had been making things for Modigliani, my furry companion of 18 years (d july 2013) and it occurred to me that other kitties and their people might like them too.

My background is painter, potter, printmaker, felt-maker: textile/fibre artist. When Modigliani decided she would no longer use the garden for her business, I had to keep a tidy litter box upstairs at all times. Trouble was, I didn't like the look of it and she didn't like it if I could see her using it. I needed a solution: simple but in keeping with the style of my house. So big plastic things were off the list and I came up with this: the Kiteepee.

In time, when I had made a few of these, I found that Modigliani liked to hide or sleep in them when they were set up away from the litter box. Fantastic! I don't like many of the fake fur and commercial cat bedding arrangements either. Nor did she.

When Modigliani passed away I was going to throw her kiteepees away, but it occurred to me, "if she liked them, maybe other kittycats will". and so Kiteepee was born.

I design the motifs for screenprints and print them myself. I also hand dye the other trims. I sew the tents and cut the poles. Basically I do it all myself. Except for the road testing and modelling for pics. That is done by the new additions to my family: Tasha and George.

They like to use Kiteepees in the garden and on the veranda as places to sleep and hidey-holes from which to launch toe attacks. Not so much as a litterbox cover. One goes in, and for some reason this is an instant invitation for the other to go in too. Bit crowded for two cats doing their business.

If yours is a discerning pussy, one that likes to live with beautiful things made of natural fibres, that look like part of the decore and not a synthetic, fluffy toy gone wrong, then this is the place for you to shop.

It is a good idea to read all my shop policies before making a purchase.

Information I Collect
To fulfil your order, you must provide me with certain information (which you authorized Etsy to provide to me), such as your name, email address, postal address, payment information, and the details of the product that you’re ordering. You may also choose to provide me with additional personal information (for a custom order for example), if you contact me directly.
Why I Need Your Information and How I Use It
I rely on a number of legal bases to collect, use, and share your information, including:
• as needed to provide my services, such as when I use your information to fulfil your order, to settle disputes, or to provide customer support;
• when you have provided your affirmative consent, which you may revoke at any time. I do not have a mailing list.
• if necessary to comply with a legal obligation or court order or in connection with a legal claim, such as retaining information about your purchases if required by tax law; and
• as necessary for the purpose of my legitimate interests, if those legitimate interests are not overridden by your rights or interests, such as 1) providing and improving my services. I use your information to provide the services you requested and in my legitimate interest to improve my services; and 2) Compliance with the Etsy Seller Policy and Terms of Use. I use your information as necessary to comply with my obligations under the Etsy Seller Policy and Terms of Use.

For purposes of EU data protection law, I, Bel Arnold, am the data controller of your personal information. If you have any questions or concerns, you may contact me at kiteepee [!at] gmail.com
See this Seller Handbook article for a sample privacy policy you can customize for your shop.