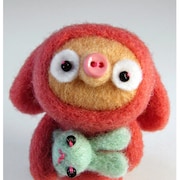 Announcement    Welcome to my nearly naked shop! I'm working as fast as I can to keep up with you all.
I can also be found on Facebook :o) https://www.facebook.com/kitgraphics

Welcome to my nearly naked shop! I'm working as fast as I can to keep up with you all.
I can also be found on Facebook :o) https://www.facebook.com/kitgraphics

Life in the Strangeland Garden

It’s a bustling Spring in the garden where the woolly creatures spend their days. The Jacabobs, Bunnies and Nurbletts have awoken from their long snugly snow-blanketed winter naps and are busying themselves tending their new giggling progeny. The green nomadic Pods have arrived from the South and are occupied with settling in. They skitter about in the morning dawn, weary from their journey North foraging for the best places to take root for the season.

I too am occupied with doing what my species does and knowing for the most part that the creatures on this side of the river often do quite well without my meddling in their affairs. I, on occasion, peek out the window of my wee abode, mostly to make sure that Larry the Goat from the pasture across the glen hasn’t wandered in for a munch, a most dangerous situation for the Jacabobs and Pods, especially the green ones. Even more mortifying for Larry but I’ll leave that story for another day.

Bernice, Evelynn and Clarice the sheep sisters who contribute most of their wool to my cause are shaved naked and out to a much deserved vacation on the grassy hills just down the lane. They scamper like school girls with the rest of their ilk, a nudist colony of four legged pink beasties.

I was sipping coffee clad in my bathrobe with my hair standing sideways in a frazzled mess from the secret night-coiffure in front of the magic slotted box braced for the startling moment when it would fling out two hot pieces of toasty bread in a direction that never can be calculated with any accuracy. I glanced out the window while I waited and saw an unusual movement at the end of the path. Squinting a bit more than my common morning squint, I looked again to observe a growing gathering of small creatures out in the garden who seemed to be organizing themselves into a cheerful mob. Collecting my toast, one slice from the dish drainer and the other from the far edge of the counter, I slipped into my Wellies (the ones that match my bathrobe as I’m awake by now) and headed out the back door and down the path to get a closer look.

Generally I avoid gatherings like this in the glen for a number of reasons, one being that while I’m rather stumpy for my species, I’m a towering giant among the natives of the wooded garden. The Jacabobs don’t mean to, but often stare, especially the young ones. I’m sure its my height but I’ve heard rumors that it might be the bathrobe or the fact that I get whacked by the ugly-stick every night without fail. I have digressed…

There was a hush over the crowd as everyone took their place along the edge of the path. Softly could be heard a tiny melody that wafted in the breeze from downwind. The furry crowd lifted up a cheer. As I turned to see, a wee procession was starting up the path and I knelt to have a better view and listen, careful not to squish a critter with my knees or blanket a smaller one with my billowy robe.

Lumbering woodchucks came first, one by one and groomed to perfection soon followed by the hedgehogs with quills standing out proudly glistening in the morning sun. The Fez-clad golden squirrels like little Shriners did ornate tumbling tricks as they scampered after the hedgehogs much to the great amusement of the baby Jacabobs and Nurblets who stood next to me on the path struggling at times to let go of the hands of their parents in all their excitement. A glorious and surprising morning indeed. The melody in the air caught in my ear.

The music grew louder as band of Jacabunnies thumped their bunny feet in unison to the tune they played, lead by a Feezle decked out in a top hat twirling a sparkling baton. The Jacabunnies exhaled through their noses so they could still smile while tooting Ocarinas fashioned from the hollow tubes of last years dried Rhubarb stalks. Percussionists marched to the beat of thrumming on the lids of fresh plucked mushrooms, sometimes throwing them high into the air only to catch them and thrum again in a decorous display of musical agility. The melody was helped along by humming Burbles clutching chubby green caterpillars under their arms, gently squeezling them to the rhythm until they purred. (making a caterpillar purr by gently applying pressure is fine art and lots of them were sadly lost in trying to perfect the technique last spring)

Giant black June Bugs came next marching four wide and ten deep, each tethered and harnessed with their six legs trotting in time with the June Bug next to them. They were the famous Regal Lipizzaner June Bugs known throughout the land for their tidy and tight toe stepping wonders. Their tank-like wings shined like rich black onyx and about their necks were strings of perfect just bloomed puffy yellow dandelions to add to their glory.

Tune in next week for the continuing saga. Does Kit Lane squish a little one by accident under her Wellies? Does she ever fix her toaster? Will the sheep form an anti-tail lopping union? Gripping stuff indeed.

Last updated on April 6, 2018
Thanks for stopping in to my wee corner of the interweb. I appreciate you having a look. If you have questions that are not covered below, please just send me a note and I'll get back to you quite promptly :o)

I once made a refund. I've never made an exchange (probably because no one has asked), although I'm not entirely closed minded. Contact me and we'll talk :o) I have also never left negative feedback nor received any which is a good indication that I'm pretty good at working things out.

Also, I can't be held responsible for delivery once I've placed the dear wee creatures in the loving hands of the Post Master although I will make every attempt to remedy the situation.

I accept payment via Paypal or credit card. Payment is due at time of order for Paypal.

If payment is not received within 3 days of order for Paypal I'll be to offering adoption of the wee creature to someone else.

Of course I make huge exceptions for anyone who simply talks to me :o)

I usually ship the same day if I can, most often times the very next day. There is one exception. I like to take Saturday off, but if I'm heading to town between 9am and 10am on Saturday, the only hour the post office is open here on Saturday, I'll cheerfully stop in with your things :o).

I ship in the USA for $5.00 and $1.00 extra for each additional item. Everywhere else is $14.00. Shipping is via First Class mail through the United States Postal Service unless you would like to make other arrangements to include return receipt or insurance.

For as long as I'm still on the planet, I will repair your wee creatures free of charge. (unless of course your kitty had its way with them) So, if an ear comes off or if you live in the jungle and humidity has had its way with the wee Bob and it simply needs its parts tightened, send it to me (you pay postage both ways) I will rejuvenate the dear one and cheerfully send it back to you, good as new.

Don't we all need our parts tightened from time to time?