Felt to Wear :: Felt to Hold 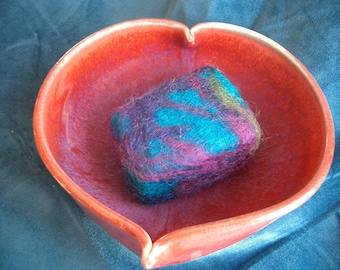 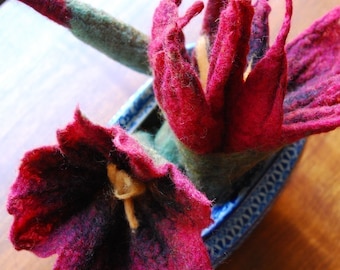 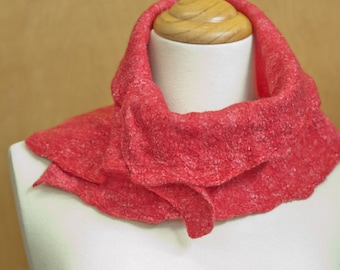 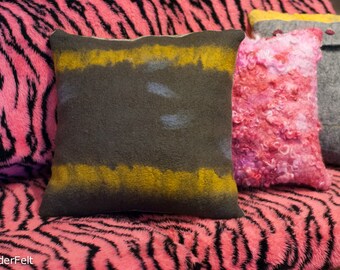 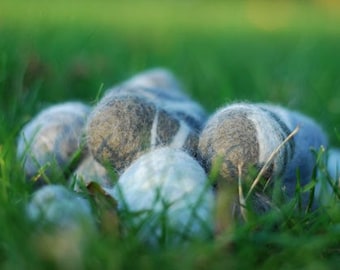 Making A Life As An Artist on a Mother's Schedule

I love color, I love texture and I love the feel of wool. There’s something incredibly satisfying that comes from creating a tangible work in a short amount of time. The idea was long ingrained in my mind that anything worth doing must take a very long time to complete. If you don't suffer for your art, it isn't worthy. There must be some agony in completing a thing of beauty. It wasn't until I started felting that I saw there was another possibility. You can spend days and weeks working on a piece of felt, adding layers, details and inlays. It is possible, but not necessary. If immediate gratification is what you want, then this could be the perfect medium. Many projects can be completed in a few hours.

Felt fabric has a unique texture. It doesn’t resemble more familiar textiles like woven and knit fabrics. It’s flat with no obvious stitch definition. It looks firms and sturdy. It’s often sculptural, appearing to stand without obvious seams or support. It’s a fabric I’ve admired as long as I can remember. Felting happens when wool fibers, laid out in overlapping layers entangle on a microscopic scale, with hot water, soap and agitation forming a solid matte fabric with a permanent bond.

My desire to craft and creates stems mostly from an intense dislike of mainstream goods. Need a birthday present? How about a mug printed with “Forever Young At Heart” scrawled across the side? Someone just had a baby girl? Better find a pink shirt that says ‘Princess’ for the happy parents. Whenever I’m compelled to give gifts, I view it as an opportunity to buy more tools or try out a new technique. I want to make something as I envision it, not as a store presents it to me. I hate shopping as well – choosing between several options that aren’t quite right, never feeling like the choice was good enough.

My gateway to the world of making felt was through knitting. I decided to make a hobby horse for my daughter’s third birthday because the only versions available in the store had speakers implanted in the ears that knickered when squeezed. I wanted something a little more rustic; the simplest solution seemed to be making it myself.

Ultimately, knitting became unsatisfying because I couldn’t knit fast enough. There were too many projects I wanted to try and not enough time. The complexity of the projects increased, requiring more and more concentration and slowing down the work. We’d been making Christmas gifts for several years, (candles, soaps, hand-bound journals, fudge), always working on projects late into the night and mailing boxes at the last minute.

The Christmas season of 2006 was approaching and we didn’t have a gift idea yet, so I suggested making felt soaps. I borrowed several books from the library, bought some roving (unspun wool) from a local yarn store and started. That project opened a door and I’m still exploring the hallways of that house.

When I started felting, my son was still in preschool. I had two afternoons per week to devote to exploring feltmaking. It wasn't nearly enough. I was consumed with the endless possibilities: how many colors can go in one piece? how sculptural can a two-dimensional object be? How can I recreate this object in felt? Soon everything I saw needed to be reinterpreted, recreated in felt. I worked on my kitchen table, so by necessity, the projects I attempted had to be completed in a couple of hours and everything had to be put away by 3 o'clock. After a year, I moved to a small basement room where I felted for another four years. Looking at the projects I made during those years, I can clearly see how my environment constricted my work. Think small. Think tidy. Think compact.

In December 2010, I rented a studio in a building with artists of various persuasions: printmakers, oil painters, encaustics (pigments mixed in beeswax applied to prepared boards), mixed media, and jewelers. My work grew exponentially once I entered a space with high ceilings and white walls. I had the space and freedom to get messy, really messy. Suddenly working with raw wool, just sheared and still full of barnyard debris was on my table.

When I look around at the work being done by contemporary feltmakers, I'm awed by the installations of Claudy Jongstra, Elis Vermeulen and the intricate garments of Angelika Werth. My next leap will be towards scaling my imagination up to take advantage of the space and light I now have. The possibilities are limitless. The hours I spent working in my basement prepared me for the big work ahead. It was an apprenticeship, as surely as any person who has spent days washing brushes and mixing pigments. Now that I've put in time working on the little stuff, which still pays my rent, I have a world of possibility waiting.

Last updated on May 18, 2022
Stop. Look. Shop. Share. Tell. I love to hear what you've seen and heard about the items here. My best ideas come from shared experience.

Please contact me in the event that you are unhappy with your purchased item. My goal is to keep all my customers satisfied.

Payment is required within seven days of purchase. If no payment has been received in this time, the transaction will be canceled.

Items purchased for delivery withing the United States will be shipped with Priority shipping, unless pre-arranged.

Local pick-up is an option for buyers who live in the Seattle area. Please send me a convo so I can change the shipping option.