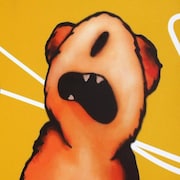 Awesome Critter Artwork For Everyone!

kudulah is taking a short break

Note from shop owner This shop is on indefinite hiatus -- please visit www.kudu-lah.com for the latest on art and apparel and other awesome things kudu-lah! Thanks very much!

This shop is on indefinite hiatus -- please visit www.kudu-lah.com for the latest on art and apparel and other awesome things kudu-lah! Thanks very much!

Our only requirement is a sense of humor... with a dash of whimsy!

Kenneth James Kudulis Jr., aka kudu-lah, has been creating artwork since the age of 4. His first piece, currently hanging in his parent's kitchen, is of two grey mice that were created from his thumbprints. Kenny was born and raised in Mobile, Alabama and spent most of his time fishing the Gulf Coast. He initially pursued a degree in Drama from the University of South Alabama, where he met Jenifer. He quickly realized that he was a horrible actor and switched gears and started painting the scenery for the theatre department. "I really had no training, just an insane desire to swirl paint around.” After graduating from college, he was hired by the world-renowned Santa Fe Opera as a Touch Up Scenic. "I learned lots about color and scale. I was just happy to be getting paid to paint, honestly. I was shocked I even got hired." From the contacts he made in Santa Fe, he landed a paid student/internship with the prestigious Juilliard School (2004-2005 Season) in New York. After completing the internship, he freelanced as an Off-Broadway scenic artist for countless theaters. Meanwhile, Jenifer was pursuing a career as an actor and Kenny spent his time painting during his free time. "I’d put down my paint bush, leave work, go home and then pick up another paint brush to do my own work. I was trying to figure out what I wanted to create." About three years later in 2007, Kenny sold his first critter painting and kudu-lah was born. He took to the streets of New York City and starting selling his artwork directly to people. "For the first two years, I spent more time in Union Square Park selling my art than I did in my insanely small, basement apartment." All of his critters were drawn after the people he saw riding the subway to and from the scenic jobs. "Come 3AM, everyone starts to look like a critter.” Kenny decided that juxtaposing his characters into real photographs "just made sense". "New York City is such a cartoony kind of place. The critters represent all of us trying to figure out this weird, wonderful world." With his "street years" behind him, Kenny and his wife Jenifer travel the United States to participate in Fine Art Shows. "If it wasn't for Jenifer helping me get organized and focused, kudu-lah would have never grown off the streets. Jen is totally the brains behind the operation." Since 2007, Kenny and Jenifer have sold his critters to tens of thousands of people all over the world. “There’s really no age requirement, just a sense of humor and a little whimsy. We sell to kids as old as 65.” Kenny’s favorite thing is “when a child comes to the booth and buys a piece of art. I mean, they could have bought ice cream but they chose art. That's an amazing compliment." Kenny currently lives in Chattanooga with his wife, Jenifer and their amazing French Bulldog, Pixel.

Last updated on January 23, 2023
Hey Thanks for checking out kudu-lah. We are here for all your critter loving needs. Hope we made you smile on your journey through are pages here at Etsy.