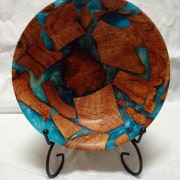 Heaven to Hand Art and Wood by Laurie Sherrell-Maurey

lauriesherrell is taking a short break

Laurie grew up in Nebraska, encouraged by her family, she became involved in art. Having tried many types of art, including pottery, she found her niche in acrylics. She moved to Michigan in her late teens and met her husband and his family. She became a born-again believer and with that, produced many great pieces that speak to the heart. While painting has been her main choice, Laurie also enjoys felting, quilting and punch needle. She and her husband moved to PA 31 years ago and began selling their work at art and craft venues where she still sells her work today. Laurie lost her husband of 33 years in the fall of 2012. She lives on a farm in northern PA with dogs, cats, and horses and continues to create beautiful art signs and other works. Etsy gives Laurie and awesome opportunity to sell her work throughout the world!
You can read Laurie's blog at https://wordpress.com/post/heaventohand.wordpress.com

Last updated on April 29, 2022
Please check out the shop announcements!

We do our very best to provide you with a quality item. It is important to us to maintain a high level of confidence for our customers. We do not give refunds but will make an exchange at buyers cost. If the buyer would like to purchase shipping insurance, please specify when ordering!

All methods of payment are accepted. Tax applies in PA. Cancellations cannot be granted once an item has begun.

Please allow up to 10 days for the creation of the item you order. It is shipped out immediately on completion. Shipping will be priority mail and on larger items, we may ship those, UPS. Christmas orders are being shipped out within 2 days of creation!

Wholesale inquiries are gladly welcomed! Please read our info on wholesale at www.lauriesherrell.com Just go to the wholesale info page! You must have a sales tax number and preferably a store front.