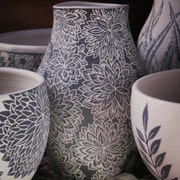 Leaves of Clay: Handmade Pottery from the Appalachians

leavesofclay is taking a short break

Note from shop owner I'm not really on vacation, just working at a different location without internet. My plan is to be back Tuesday....

I'm not really on vacation, just working at a different location without internet. My plan is to be back Tuesday....

Thank you for looking at my work.

Here are some late night ramblings....

I've been working with clay for a lot of my life in some way. Every since I was little, I have been interested in clay. My father built me a play kitchen with a dishpan built in as a sink. But instead of pretending to wash dishes, I dug up dry clay I found a mile away, brought it home and dissolved it in the sink so I could experiment with it. It was my first experience with clay and I had no idea of a connection of clay with pottery. I had never seen pottery. I knew of plastic and glass.

I focus mainly on functional pottery. It is my favorite metaphor for the many circles that turn, connect and intersect in this world. The clay, formed by many organic processes involving and intertwining with birth, life and death, comes from the earth. As all living creatures do, I constantly look for or plan for nourishment to sustain my own life and the lives of others around me. For this purpose I look to the earth.
Containers of some sort play a large part in our lives as humans. They separate prepared food from its source. Eating remains a constant for existence, regardless of how refined and separated we may think ourselves to be. Pottery comes straight from the earth. It is as organic as we are. It is the perfect utensil to assist in our ritual of food intake. It aids in a worship of our planet and the life it gives to each of us. Just as this planet turns, clay turns in a circle on the wheel. The cup, plate or bowl participates in the ritual of nourishment, but eventually food, clay and we will circle around to return to the earth to continue all evolution and metamorphosis.

My obsession with leaves is closely linked to my surroundings. I live in the Smoky Mountains of North Carolina in the Appalachian Mountain Range. These are very old mountains. They have endured much and recently they have experienced a lot of development. Many of the small valleys are full. The only place left to build is up on the slopes. It is not uncommon to travel after a period of time to the next town over looking at the scenery thinking something is missing. Yes, there's a mountain missing. It has been demolished and hauled off.

A few years ago I was driving on the highway about 7 miles from home. I saw a group of workers with bulldozers and chainsaws attempting to do some "beautification" of a building site. They were cutting down maple, oak, ash, poplar, hemlock, fir and buckeye trees. Mingled in this little forest were some mimosa trees. The only trees they left standing were those invasive mimosa trees.
Some of the most diverse plant species can be found in this area. It is disappearing. Not only is it disappearing from development, it is disappearing from foreign species of plants and insects and pollution. The American Chestnuts are gone. The hemlocks are next.

Even though I do not use exclusively native leaves, I use and recycle them the majority of the time. I do not discriminate against "weeds" for I feel that they are beautiful too. They are also very often medicinal and nutritious. Pressing leaves into clay takes them out of context and allows that plant to show a new and, hopefully, true identity.

My hope with creating pottery with leaves is that the leaves will intrique someone enough to research that plant and find out about its origin and benefits. Maybe, even if it's only one person, they will think about these native, some very rare, plants when building a new house, planting a garden or using "weed" killer. Just maybe those plants will have a chance to vine and interlace other cycles and circles and live on so that we won't be left with only these fossils that I'm making.

If you're wondering about my education.... I have more than my share of that. I took a lot with me and I left a lot behind. But the most important thing I know is that no matter how much I have learned, I know nothing. I haven't even begun to scrape the surface of any subject.

Last updated on April 30, 2022
Thanks for stopping by.
I started selling pottery through etsy on March 19th, 2008. All pottery is hand made. I focus mainly on functional pottery, but I do other things too. Most of my work is made with the use of a wheel. I fire predominantly with an electric kiln to cone 6 (approximately 2199 degrees fahrenheit). I use only lead free and barium free glazes. All pottery is microwave and dishwasher safe. Check back often. I'm making stuff everyday. I'm a steady worker, but my process is somewhat slow.

I will accept returns of unused items. Please let me know you intend to return an item before you mail it back. I will refund the amount of the item and will refund that amount based on payment type.
Please pack items carefully and respectfully.
Thank you so much.

I accept paypal and money orders. If there is going to be a delay in payment (more than 3 days), just let me know. If you give me a time frame, I can usually work with it.
If you pay with an e-check through paypal or with a paper check, the check must clear before I can ship.


Though I prefer paypal, I do accept money orders and checks. If you intend to pay with a money order or check, please let me know once you have bought an item. If paying with a check, items will be mailed once the check has cleared.

****When purchasing with paypal please make sure your etsy shipping address matches your paypal address. If they do not match , please let me know why. I understand it may be a gift. I just want to be sure that your purchases are going to the right address. If I email you or convo you about the difference and I don't hear anything back after 3 days, I will mail to the etsy address you provide.
You can tell me which address you want to use by email, the conversation link or with "message to seller" section during the checkout process.
Thank You.

If it's winter, shipping may be delayed. I live in a mountainous area and our county has maybe 2 snow plows. It can be very dangerous to drive here during snow.

Please understand that I can not be responsible for items lost during shipping. Also be aware that going through customs can be a lengthy process.
I ship with USPS. I try to keep shipping prices as close to the actual shipping cost. I have not yet required shipping insurance. I am leaving that up to the customer as of now. Requesting shipping insurance is easy. Hold off on paying and write to me saying you would like shipping insurance. I will then send you an updated invoice. If you're paying by money order, add $1.75per $200.
UPS is also an option for shipping. However their shipping prices are higher and would require an updated invoice.

Please keep in mind that the pottery I make does require a lot of time to make. If you need it quickly, I might not be the potter for you. I do not consider myself to be a production potter. Every piece is unique. If I make a set of bowls, for example, I make them to have a similar feel to each other as a set. I don't attempt to make them exactly alike.