Announcement    From meticulous reproductions of Victorian and Craftsman tiles to whimsical art tiles and other creative projects, L’esperanceTile on Etsy features the work of noted tile maker, Linda Ellett. As we mourn her untimely passing, L'esperance Tile Works is committed to honoring her legacy by continuing L'esperance Tile Works under the direction of her partner in life and business, Don Shore.

From meticulous reproductions of Victorian and Craftsman tiles to whimsical art tiles and other creative projects, L’esperanceTile on Etsy features the work of noted tile maker, Linda Ellett. As we mourn her untimely passing, L'esperance Tile Works is committed to honoring her legacy by continuing L'esperance Tile Works under the direction of her partner in life and business, Don Shore. 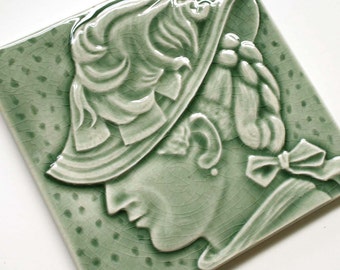 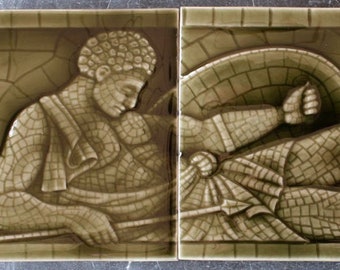 Uniquely crafted tiles and pottery for your home.

L’esperance Tile Works was founded by Linda Ellett, who spent her life “playing in the mud.” Brimming with creative energy, she honed her talents at Alfred University and apprenticed at the Moravian Pottery and Tile Works in Doylestown, PA. She founded L’esperance Tile Works in 1979, where she produced art tiles of her own designs. In 1979 she started her business with a small inheritance from her Grandmother, Elizabeth Hope Collopy. Her great grandparents had come from Canada and anglicized their name to Hope from L’esperance. Grandmother Collopy was an entrepreneur and Linda was inspired by her strength and determination.

Linda married Don Shore in 1983. With his interest in urban planning and Main Street revitalization, Don became an enthusiastic partner — in life and in business. He inspired the transition of the Tile Works toward larger projects focusing on tile restoration in historic buildings. Don likes to say that in more than 30 years together he served the longest ceramic apprenticeship in history. If Linda was the creative engine, Don was the production guru — developing new ways to make historically accurate tiles by hand. Through the years Don and Linda have produced tiles for the Mark Twain House, the State Capitols in New York and Ohio. Their tiles have shown up on movie sets and in the houses of celebrities and lovers of historic tile as far away as Australia.

Sadly, Linda passed away in early 2016 after a courageous battle with cancer. Her spirit lives on in the extensive library of hand carved moulds and carefully recorded glaze formulations. Don is committed to continuing the legacy of L’Esperance in her memory.

Our shop is where we share our favorite tiles along with new creative explorations. Some items are “one-of-a-kind”, like my bowls, cups, etc. and each photo is of the item that you will receive. However, because the tiles made from my plaster moulds are very similar, I use the same photo for the same pattern and glaze. Therefore, tiles may vary slightly in glaze application from the photo......very slightly!

ALSO - all of my tiles that are made from my moulds can be glazed in any of the colors you see in my Etsy store - SO - if you’d like a blue glaze on a tile listed with a yellow one, convo me and I’ll make it so.

Some of my employees are very gifted artists, and you'll find examples of their work here in my etsy shop, until they have stock enough to open their own shops...I'll keep you posted!

I’ve been making tiles since 1979, and haven’t had much experience with customers who are unhappy with the quality of my tile. That said.....I take pride in making sure my customers are extremely happy with their purchase. If you aren’t happy, please convo me and I’ll make it right.

If you’d like to return a tile, I’ll refund the price of the tile and the cost of shipping. Your money will be refunded once the piece safely arrives back at its location of creation. If you’d like to swap it for another, just let me know. You will, however, be responsible for both shipping costs of sending the unhappy tile back and receiving the replacement.

If you are happy with your purchase, please feel free to leave feedback. Thanks!

I accept Paypal, personal checks, and money orders, along with credit cards. If you’re paying with Paypal, please submit your payment at the time of purchase.

You do not need a PayPal Account to pay for your items through PayPal:

You can choose the PayPal Option during checkout. After you submit your order click the "Pay Now" button. Scroll Down and you will see the option to pay with a Credit or Debit Card WITHOUT having to sign up for a PayPal account.

Payment must be made in full and have cleared before the item is shipped.

If you are having any issues with PayPal, please do not hesitate to contact me and I will attempt to assist you in anyway that I can.

If I haven't heard from you within 3 days, I’ll convo you with a payment reminder. I’m happy to hold your purchase for 3-4 days, but if I haven’t heard from you after my reminder, I’ll assume the purchase needs to be cancelled.

I ship my work through either USPS or FedEx, unless otherwise requested.

All USPS shipments are made through Endicia, and an automated notice with tracking numbers will be sent to your e-mail address as soon as I've purchased the postage.

Items will ship as soon as your payment has cleared, usually the same day. I don’t include insurance with USPS shipping - please convo me if you’d like it added and I’ll adjust the cost of your invoice to reflect the added insurance. FedEx shipping does include insurance.

If you’d like expedited shipping, or a quote on international shipping, I’m happy to provide you with an estimate...just convo me before purchasing an item.

If your Etsy and PayPal address differ, please let me know in the “message to seller” note during checkout.

Want a special glaze match or custom designed magnet, ornament or tile? Would you like wholesale pricing on orders over 20 pieces? I’d love to talk to you about it, just send me a convo and we'll talk!!