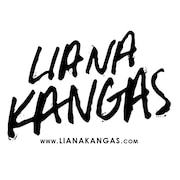 lianakangas is taking a short break

Note from shop owner Hey guys! My shop is closed on Etsy for the unseeable future. You can find my new shop through my website lianakangas.com.
Thank you so much for your support, it means the world! Feel free to hit me up on Twitter if you have any questions.

Hey guys! My shop is closed on Etsy for the unseeable future. You can find my new shop through my website lianakangas.com.
Thank you so much for your support, it means the world! Feel free to hit me up on Twitter if you have any questions.

Hey guys! I'm Liana, a freelance comic artist and illustrator who works in editorial and sequential illustration in both digital and traditional formats.

I have a lifelong love of comics and a background in marketing and graphic design, which combined the two to pursue a full time freelance career; including being featured on Vice, Nerdist and Comics Alliance as well as being published in Comic Mix's Planned Parenthood graphic novel Mine!, and Image Comics Where We Live working a co-created indie comic, BlackOUT and more...

I attended Florida Institute of Technology and graduated in '10. Grew up in Melbourne, FL and have spent the last four years as an expat; living in Canada and multiple states.

Find me on social media below or shoot an email at: lianakangas at gmail.com

Last updated on May 10, 2022
Thanks for stopping by! If you are interested in any custom work, please shoot me an Etsy conversation for a quote. My studio hours are flexible, so I should be able to return to you within the next business day!

Currently I cannot offer refunds/exchanges at this time. If in the rare occurrence an item arrives damaged, I will coordinate to offer a partial refund (minus shipping), or send a replacement. Thank you so much for your understanding.

I accept paypal, credit cards and direct checkout through Etsy.
(Items will not be created/sent until payments have cleared.)

All items purchased typically ship via USPS unless otherwise noted. I have added upgrades available for purchase on each item in case you need it sooner!

Shipments are made every Monday, Wednesday and Friday unless there is a holiday.

Please send me a message if you have a question about upgrading to expedited shipping or to request tracking.