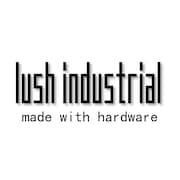 Announcement    Industrial Jewelry Made With Hardware. Specializing in Morse Code Jewelry! See my work in person at my shop in Lowell, Massachusetts or visit http://lushindustrial.com/

Industrial Jewelry Made With Hardware. Specializing in Morse Code Jewelry! See my work in person at my shop in Lowell, Massachusetts or visit http://lushindustrial.com/

I have a degree in Computer Science, and worked in the tech industry for 8-9 years. After being laid off from the tech industry in 2002, I was trying to decide if I even wanted to work in tech anymore. I was pretty burned out.

I had started making jewelry 2 years before; I was turned into a beading addict by a similarly afflicted friend. I decided to start selling my jewelry as a way to keep myself sane while job hunting. That's when I started Lizzie's Things.

Through a random series of events, I ended up with part-time jobs at 2 different bead stores. I really enjoyed it! I ended up selling my house because I had finally decided I didn't want to be in tech anymore. Someone suggested I open my own bead shop, and I figured it was a good time since I had the proceeds from the sale of my home. My brick and mortar bead shop called Lush Beads opened in Lowell, MA in 2004. I ran the shop until December 2013. Now I focus on jewelry making.

Last updated on May 10, 2022
Welcome to Lush Beads! I'm glad you stopped by to shop in my store. If you have any questions, please do not hesitate to contact me via convo.

There are no refunds on pattern purchases.

Payment should be received within 3 business days of placing your order. Items are shipped once payment clears in full. MA residents will be charged state sales tax.

Items are shipped once payment is received in full.

I ship US Postal Service first class. If you would like insurance or delivery confirmation, or want to upgrade your shipping, please convo me before paying and I will send you a revised invoice. I am not responsible for loss or damage to uninsured items.

Any single item priced $90 or more will be shipped US Priority Mail with insurance (US only) and delivery confirmation (US only). These additional costs are already on your invoice, so no need to wait for a revised invoice.