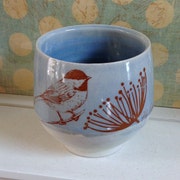 Announcement    ALASKA & Hawaii RESIDENTS; Due to the high cost of shipping to these areas as compared to other states, I will have to charge extra shipping for your purchase. Before shipping I will convo you with correct/exact amounts. Thank you!

ALASKA & Hawaii RESIDENTS; Due to the high cost of shipping to these areas as compared to other states, I will have to charge extra shipping for your purchase. Before shipping I will convo you with correct/exact amounts. Thank you! 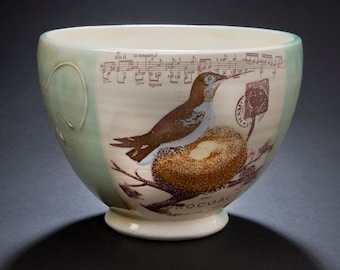 I began making ceramic art in 1988, after a short-lived career as a city and environmental planner in Santa Barbara, California. Upon moving to Boulder, Colorado that same year, I finally completed an MFA in ceramics in 1993.

Since that time I have migrated to the high desert outside of Santa Fe, New Mexico and am the sole owner and operator of Magpie Pottery. For the past 15 years I have shown my work in numerous galleries and art shows throughout the Southwest, including the prestigious Cherry Creek Art Festival in Denver, Colorado.

I am the co-founder of the highly successful Contemporary Clay Fair which is produced bi-annually here in Santa Fe. I have taught at several colleges in the Denver and Santa Fe areas and currently teach workshops on the decal process in my local community.

While I wheel-throw my smaller pieces, I have had to convert to hand-building all my larger bowls and platters since double wrist surgery in 2012. I electric fire all of my work to cone 6 and then do a third decal firing to cone 02.

My work has been published numerous times in local magazines as well as in Lark Publishers' ever-popular 500 Series, including 2013's Best Of 500 Ceramic Series.