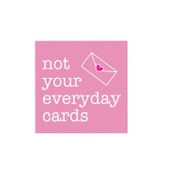 matdi123 is taking a short break

Note from shop owner Due to circumstances beyond my control, I am closing my shop for...I'm not sure how long.
A huge than you for all the support over the years!
I'm still around so if you need anything, message me!

Due to circumstances beyond my control, I am closing my shop for...I'm not sure how long.
A huge than you for all the support over the years!
I'm still around so if you need anything, message me!

A Little Bit Of Luck, Lots of Love and Loads of Passion

The story of how my online store came to life is probably quite a bit different from others. While I could exude a ton of confidence and tell you that my shop was meant to be due to my very art-oriented upbringing or that my parental figures were the picture of perfection in running a successful home business from the time I was a young girl...well, that just wouldn't be true.

In actuality, my family was not that into art, not even simple arts and crafts. My sister and I would sometimes be crafty but she was the one who had the perfect art projects and I was the one who would watch. As for having an example of someone running a business from home, well, that was unheard of. I can't imagine if one or both of my parents had declared that they were going to run a business out of the house. I'm sure it would have been deemed silly and irresponsible.

This isn't to say that my upbringing was poor. It certainly was not. I learned many valuable lessons from my parents and over time I even learned to believe that what they were saying was true - "You can do anything and you deserve the best".

So, how did my shop come to be? Well, it was sort of, for lack of a better work - luck. Yup. Luck and some love. Luck, love and a soon-to-become passion for paper that I didn't even know existed...

It all started one Christmas when my sister gave me some supplies to make my own cards. I remember thinking "Why did she give this stuff to me? I am not crafty!" But, I had just had my second child and instead of feeling complete with the family I had always wanted, I felt empty. More empty than I thought possible. I had never had any hobbies or passions and I was worried that I would never have anything tangible to pass on to my children. My husband was the one with all the hobbies and had so much to share, what did I have?

So, with nothing to lose, I started to make cards from the the meager supplies I had and it was fun. Really fun. It was the best feeling to be creative and to do something that I enjoyed so much.

After realizing that my supplies were indeed very modest, I headed to the craft sore and was amazed at the new world I had found. I had seen scrapbooking/card making supplies at the store before but had never realized that people actually bought the stuff! It was eye-opening! After coming home, I started to make cards in earnest.

After doing what most people would consider very little research, I opened my Etsy store. I called my sister and she bought some cards right away but my first true sale didn't occur until a full 2 months later.

At the point of my first sale everything changed.

No, sales didn't take off.

And, no, I wasn't recognized for my outstanding work.

Something changed in me. I found what I had been looking for. A new outlook on life - full of promise, motivation and confidence. I found that I could do something that no one thought I could. I could make something with my own two hands and others would appreciate it and want to buy it.

I hope you enjoy my creations as much as I love to create them!

Last updated on April 29, 2022
Welcome to my little corner of Etsy! Please stay and browse and feel free to convo me with any questions.

At this time there are absolutely no refunds.

If your item does not arrive, we will talk and we will come to a decision that everyone is happy with.

You have 48 hours to pay. If payment is not received your order will be cancelled.

The amount that I have listed for shipping is non-returnable and non-negotiable. I feel that the prices listed are fair.

In addition to a shipping fee, I am charging a handling fee (which is included). I ship every Monday, Wednesday and Friday. If you need your items rushed to you please let me know and I'll see what I can do.

The rest of your shipping fee allows me to buy shipping supplies to help keep your items safe and sound.