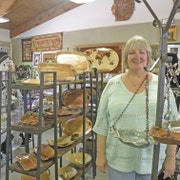 "A Matter of Taste Pottery" Fun and Functional Pottery!

MatterofTastePottery is taking a short break

Note from shop owner Hi Everyone,
My shop will be Re-Opening" Early Spring with new and exciting items made just for you! Please check back then!

Thanks for your continued support!
Michelle
p.s. You can always message me if you are in need of a special 🎁

Hi Everyone,
My shop will be Re-Opening" Early Spring with new and exciting items made just for you! Please check back then!

Thanks for your continued support!
Michelle
p.s. You can always message me if you are in need of a special 🎁

"A Matter of Taste Pottery"
My love for pottery began when I was very small, around the age of 8, back in the 60's. BUT, The start of my Pottery Careet began in 2000. I was fortunate to live in North Carolina at the time, the pottery capital of the United States.
I began by taking several courses from a local pottery studio with a Master Potter as my teacher.
My main focus at the time was wheel throwing, bowls, mugs, pitchers and such. From there I progressed to handbuilding using a slab roller and an extruder.
Through the years, and many trips to Seagrove, Ashville and Balsam North Carolina, I became friends with several 2nd, 3rd and 4th generation potters. Through these friendships came many pointers, tips and tricks and most importantly, critiques of my work.
By late 2001, I was able to set up my own studio and gallery at our home in North Carolina. From there, I was able to work independently with my focus on practicing and learning new tecniques, along with being able to create my own style of Pottery.
In early 2012 my husband was getting ready to retire, I knew then that my studio was going to be moving but to where? We had decided to move to the west coast, Southern California to be exact, where we had lived once before. We moved in April of 2013 and by August of 2013, my studio was up and running.
We lived in the San Bernardino National Forest in the little town of Running Springs, population 5025, Elevation of 6500ft.
We have since moved back to the Midwest (Northeast Ohio) to be closer to our family. My studio is once again up and running!

All items are hand made and One of a Kind.

All items unless specified are "Food Safe, Microwave Safe and Dishwasher Safe"

Should you have any questions, please ask.

Thanks for shopping my Etsy Store!

I want you to be happy with your purchase!

All information included in the listings is as accurate as possible.

Variations in colors will occur (I have no control over this, it is all up to the clay and glaze powers above). Measurements are approximate.

All items are of 1st quality.

I am more than happy to work with you, should you be truly unhappy with your purchase, please let me know within 3 days of receipt.

Return shipping costs is the responsibility of the buyer.

Shipping costs, to and from, are not refundable.

Actual cost of initial shipping for returns will be deducted from the funds returned to you on FREE SHIPPING ITEMS.

Refunds will be issued once the product is received, and it is in original condition.
Sorry, but shipping will not be refunded.

Since insurance is included in shipping, all damage claims will be directed to USPS. Please keep all original packing material and boxes and please take a photo of the damage.

I currently accept the following: All Etsy payment methods.
Ohio Residents will be charged 8% Sales Tax.

Great care is taken when preparing your order for shipping (extra bubble wrap and other cushioning material will be used) to minimize any possible damage.

Most items will be shipped within 1-2 business days using USPS Standard Post with delivery in 2-8 business days depending on destination. You may choose to upgrade shipping to Priority Mail for an additional cost.

Tracking information will be sent to you once an item is shipped.

If you live in the Cleveland area, and would like to save on shipping, arrangements can be made for you to pick up your purchase at my studio, which is located on the beautiful west side.

Each item is handmade, and each have characteristics of their own. The images used are a representation of the item and do not feature the exact (unless specified) item that will ship. No two pieces are exactly alike!

Is this a Gift?
Gift Bag w/tissue and Message Cards are available.

Please include your message (limit 50 letters or numbers) in the "Message from the Buyer" section of the Etsy receipt.

Shipping to a different address? Please include this in the "Message to Buyer" section of the Etsy Receipt.