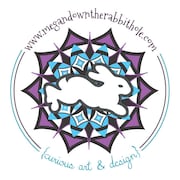 Announcement    I believe that magic is all around us. I've always been fascinated with colors, fractals, kaleidoscopes and mandalas, and you'll find that my art is rich in these influences. Follow me down the rabbit hole...I think you'll like what you find!

I believe that magic is all around us. I've always been fascinated with colors, fractals, kaleidoscopes and mandalas, and you'll find that my art is rich in these influences. Follow me down the rabbit hole...I think you'll like what you find!

In high school, being your typical right-brained creative type, it only took three weeks before I was hopelessly confused in Geometry class. Despite of my lack of math skills, somehow I’ve found a personal style that many people relate to geometry and fractals. I think, at the most basic level, a connection to pattern, shape and symmetry is hard-wired into our collective consciousness. I love intricate shapes, repeating patters, and bright, vivid colors. Although I had never heard of mandalas until a college professor introduced me to them, after reading up and studying them, I felt like I had officially connected to an influence that until then had been nameless. I can spend hours studying the interplay of color and pattern within the viewfinder of a kaleidoscope, the pattern of petals on a flower, or a swirl of clouds in the sky.

Drawing and painting to me is like a form on meditation. When I’m deeply engrossed in a piece the world falls away, and none of life’s problems matter. Hours pass in the blink of an eye. I want my work to have the same effect on the viewer, and for people to find themselves “lost” in it, if even only for a few minutes.

From the swirls on VanGough’s Starry Night to the tight geometric patterns of MC Escher, I draw from a wide circle on influences. I deeply admire the dreamy surrealist painter Remedios Varo, and the transformative and spiritual work of Alex Gray. I believe that art should bridge the gap between the everyday world and a “higher” place. It should draw us in, full us with life, and revitalize us. Art should create energy. Art should have life.

Last updated on May 10, 2022
Thanks for visiting megandowntherabbithole! Here you can find one of a kind artwork created by me. I LOVE experimenting with different colors and patterns, which I think is reflected in my work. A lot of people have told me that my art has a mathematical bend...funny when I'm one of the most right brained people you'll ever meet! I love art that is vibrant, unique, and that you find yourself getting "lost" in.

For more insight into my creative process, you can check out my blog at www.megandowntherabbithole.com.

I hope that you can find something here that you love as much as I loved creating it!

I am happy to accept PayPal, credit cards, and Etsy gift cards. Most orders will be shipped within 72 hours of receiving payment (with the exception of large pieces that are printed to order). Payment is due within ten (10) days or your order will be cancelled.

To save you money, all orders are shipped via USPS unless otherwise requested. Orders too large for a USPS flat rate box will be shipped FedEx Ground. If you need your shipment sooner please contact me, and I'll be happy to ship it via FedEx Express for an additional cost. Please convo me with any questions or concerns.