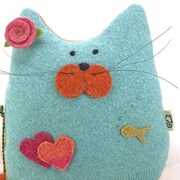 minfidler is taking a short break

I have always loved beads and the endless variety of shapes, sizes and colours they come in. During the years that I was lucky enough to travel the world, I collected as many beads (semi-precious, stone, glass, or metal) that I could fit into my luggage…never once did I consider how glass beads came into being.
One day, while searching the Internet for information on making polymer clay beads, I discovered that people actually had the equipment to make glass beads in a domestic setting, often in their garden sheds…so that set me off on a mission to make glass beads myself. That dream took almost six years to fulfil, requiring one international house move and another within the UK.
Eventually I took a glass bead making class with Diana East, and when I finally had the money, and space, I ordered my own equipment. I have been making beads off and on now since October 2007.

In early 2015, when it was far too cold to be in the shed, I began collecting cashmere and pure wool knitwear from various sources, washed it in environmentally friendly products until it was slightly fulled, (or 'felted') and made soft sculpture cats with it. That project was interrupted by a planned temporary move to Glasgow, followed by buying a house in Glasgow, but this last move is permanent, thank goodness! I'm hoping that I will feel settled enough to start making knitwear cats again in the near future, it's been a hectic couple of years and I'm impatient to be back in a making frame of mind, but I am finding it harder to start up again than usual.

Meanwhile, Etsy is a big place - thank you for stopping by,
Min
www.applegreenmachine.co.uk

Last updated on August 20, 2014
When I became a lampworker I had no idea I that would also have to learn about terms and conditions for distance selling, how to take reasonable photos of beads, how to build a website and so on. No just getting up and 'playing'.
Basically, the customer, you, is protected by law, I have no intention of upsetting the law, and certainly not my customers if I can help it. I have set out Terms and Conditions below, (updated June 2014) they aren't cheery or entertaining, hopefully the beads I make will be. I hope you like browsing through my work.

I do what I can to accurately describe the items for sale, and attempt to take the best photographs of my work possible in order to help you to decide on your final purchase. Computer screens are not all the same, (mine's a Mac) so resolution and colour rendering of monitors need to be taken into consideration when comparing the item to the online image.
All my beads are kiln annealed for strength and durability. I'd like to have happy customers and will endeavour to do what I can in order to achieve this.

I intend to abide fully by the Distance Selling Regulations (DSR)

In the event that any order is incorrect, the customer must notify me within 14 (fourteen) days after they have taken delivery of the order.

If I have made a mistake or if the product is faulty or damaged, the product shall be returned to me at my cost (first class standard mail). Please obtain a free 'proof of posting' from the Post Office and please ensure that the goods are packaged adequately to protect against damage. I will send a replacement item at my own cost, or offer a refund if a replacement is not possible. I am not obliged to pay any more for the return postage than the original postage cost.

If you wish to return an item for any other reason (i.e. - unwanted, not as you thought, changed your mind), in this circumstance, the customer agrees to pay for the postage to return the goods to me as per the DSR. This cost shall not be refunded. When returning the items, please obtain a free proof of posting from the Post Office and please ensure that the good are packaged adequately to protect against damage. Please ensure correct postage is paid - I will not pay the fee to obtain a package returned without correct postage.

If a refund is due, the refund or a credit note will be processed within 14 days of cancellation of contract or receipt of goods (or of evidence of the you returning them, ie - proof of postage of item).

If you fail to take reasonable care of the goods before they are returned to me, and this results in damage or deterioration, I will charge you for the reduction in value.

I do not offer refunds for personalised items, please ensure at the time of ordering is that all of the information you provide is accurate and correct.
The cooling off period and right to cancel do not cover contracts for goods made to your specification (custom-made).

The preferred online payment method for goods is via Paypal. You don't have to have a Paypal account in order to use the service.
You must ensure that your personal details, including the address for delivery, are complete and accurate.

I reserve the right to alter or withdraw products given on this website at any time.
I shall endeavour to meet all orders.
I do not, however, guarantee the availability of any product at any time.
You acknowledge that sometimes products may be withdrawn or discontinued.
I shall make every effort to update the website at all times.

For commissions and personalised items please contact me to discuss your requirements.

I do not offer refunds for personalised items. Please ensure that at the time of ordering all of the information you provide is accurate and correct.  The cooling off period and right to cancel do not cover contracts for goods made to your specification (custom-made).

Delivery costs are clearly displayed before finalising your order.
Delivery of the products will take place at the delivery address entered on your order.

I always use UK Mail 'First Class' delivery, post sent through this service in the UK will often arrive 'next day' and certainly should within five days (according to the post office).

International and European orders are sent by First Class Airmail, if you require a trackable service you can choose a 'signed for and tracked' postage upgrade in the cart.
PLEASE NOTE - post to non-EU countries can take up to 3 weeks to arrive!

I am sure you will appreciate that once I have handed your order over to the post office, it is in their hands and I can only quote them on how long they say it will take to get your order to you.

The cost of the item, postage and packaging, is clearly shown before purchase. Please be aware that if you are ordering from overseas, your item may be subject to additional customs taxes and charges, over which I have no control, and am not accountable for.

I am committed to protecting your privacy. All information will be collected lawfully and in accordance with the Data Protection Act 1998.
The information given at the time of ordering will be used only by me and will not be distributed to any other companies or individuals.
I will only use your information to process your order, or for the return of goods requested by you.