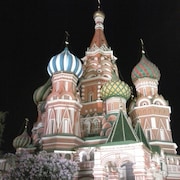 Vintage items from Russia and the former USSR

Announcement    ANNOUNCEMENT: we are out of town until January 16, 2017. Any orders placed between now (late December) and then will be shipped when we return.

ANNOUNCEMENT: we are out of town until January 16, 2017. Any orders placed between now (late December) and then will be shipped when we return.

Life Behind the Iron Curtain

I'm sure that when most Americans think of the USSR, images of the Cold War, gas masks, tanks, the KGB, bread lines, scared people walking around with their heads down, and an overall dreary atmosphere come to mind. However, there are multiple sides to every story, and while most reasonable people would not want to return to the Soviet era, many creative and well-designed products were created during this period.

I first became interested in Soviet vintage through my Russian husband. In 2010, I found several Soviet vintage items online and, intrigued, showed them to my husband (then boyfriend). He started to tell me about how he too had a plastic compass watch as a child, and how he was teased for looking like Lenin in the star-shaped Octobrist pin he wore in elementary school. Right then and there, I wanted to start selling Soviet vintage as well. However, we weren't able to go back to Russia until the summer of 2013. Once we were back, though, I hit the flea markets and started buying like mad! I fell in love with all the Misha the Bear memorabilia I saw, and decided to name my shop after him. (Misha was the mascot of the 1980 Olympics, which took place in Moscow.)

My goal with Misha the Bear is to showcase a different side of the Soviet Union - the beautifully designed, funky and retro, and sometimes downright adorable products that were created during this time - and to share them with you. I hope you like what you see!

Last updated on May 9, 2022
Thank you for stopping by at Misha the Bear Vintage! Our goal is to provide cute, beautiful, and unique objects from the Soviet Union. We specialize in pins, postcards, ceramics & housewares, Christmas ornaments, and everyday Soviet objects, such as tea glass holders and tin canisters, to name a few. We welcome customers from all over the world, although we focus on North American customers, as Soviet vintage is hard to find here.

Vintage items, for the most part, have been pre-loved and used extensively over the years by others. While I try my best to inspect each item for flaws and to include these flaws in my listing descriptions, it is always possible to overlook some minor flaw. If you would like to see more photos of an item before purchasing, please contact me and I would be happy to send them to you.

Returns are accepted if the item has flaws that I have overlooked. You are responsible for the return shipping.

A full refund will be issued if items are damaged (to the point of no use) in shipping.

We accept payments via Paypal and credit cards. Reserved items will be held for 5 days; if not paid within 5 days, we will release the item to the public.

We ship within 1-3 days of your purchase. Any excess in postage over $2.00 will be refunded via Paypal. Please let me know if any special instructions to the courier are needed.

Books and magazines will be shipped the most cost-effective way (saving you more money) - in some cases Media Mail, in other cases, First Class.

Please feel free to contact us with any questions.