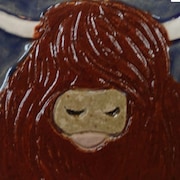 Announcement    HI. We are currently reviewing all of our listings and will be rebuilding our shop with a whole new look. Please check out our blog at mokapottery.com for up to date information.

All current orders have now been despatched as expected.

We hope to bring you a whole new range and of course some old favourites.

We hope you find what you're looking for here, but if you have a ceramic item in mind and don't see it here, we're also happy to take commissioned orders. Contact us to let us know your requirements and we can set up a custom listing for you.

Please check out our latest news on our mokapottery.com blog.

HI. We are currently reviewing all of our listings and will be rebuilding our shop with a whole new look. Please check out our blog at mokapottery.com for up to date information.

All current orders have now been despatched as expected.

We hope to bring you a whole new range and of course some old favourites.

We hope you find what you're looking for here, but if you have a ceramic item in mind and don't see it here, we're also happy to take commissioned orders. Contact us to let us know your requirements and we can set up a custom listing for you.

Please check out our latest news on our mokapottery.com blog.

From Khaki to Clay; a new forever home for MoKa Pottery

Over a decade ago, partners Mo and Kath Gibson-Kelly discovered clay. What seemed like a fun hobby became an obsession, and soon all their spare time was taken up with pottery. When they weren't making things in clay, they were looking at pictures of other pottery for inspiration, reading about techniques and glazes, or drooling over kilns and potters wheels and clay tools.

Eventually, the garden shed was emptied of old paint pots and broken gardening tools and transformed into what is lovingly known in the household as 'The Shedio' (that's the shed/studio). With a workbench, a potter's wheel, kiln, sink and more shelves than you can shake a stick at, it became a home from home for the pair.

In 2014, they decided they had outgrown the shedio, with both working full time in clay or pottery related pursuits, and so took on a dedicated studio/workshop space in a room within a bigger building in a former POW/Army training camp. The camp, in its previous life as an Army training camp had hosted Territorial Army and Cadet units for military skills training, and Kath spent many a winter night in her combat uniform, huddled around a pot bellied coal fired stove to keep warm in the distinctive Nissen Huts that served as Billets for the soldiers.

Less than a year later, and again THIS new studio was already starting to feel 'too small', despite being three times the size of the shedio.

And so the pottery is now in its long term home, occupying its very own Nissen Hut within the same camp. After picking up the keys, the hut was given a quick lick and a promise with paint in the shop display area in the five days between summer markets, and with some very strategic use of display furniture, it opened to the public in September 2015 for Perthshire Open Studios.

You can see the progress of the transformation of the hut on the MoKa Pottery Facebook page, in the album 'The Hut Transformation'.
http://tinyurl.com/zceubgw

With over 1600 square feet of workshop and shop display space, the pottery now has lots of space to grow and develop. First on the priority list was an electricity supply and this was connected in late spring 2016, after many months of practicing hand building pots wearing wooly gloves, hats and scarves, and some very creative use of LED rechargeable lighting.

There's still a lot of work to be done with the building; mains plumbing and drainage are hopefully next, after replacement doors and windows to keep out the draughts. The camp is slowly being brought up to modern standards and with the addition of a couple of wood burning stoives in 2017, the girls hope to be basking in a warm and toasty hut with some dividing walls and a separate kiln room.

Autumn 2016 also saw the start of classes in the studio, with the first intake of budding ceramicists completing their first pieces just in time for Christmas. As well as the classes, there is always some piece if pottery on the go; a slab rolled out waiting to become tiles, cups, a checkers board.... Or balls of clay weighed out in even lumps waiting to be thrown on the wheel into bowls, vases, Whisky cups.... Or hand formed into the studio's signature 'Egghead' pieces; a ceramic zoo of penguins, chicks, owls, sheep or the ever-popular "Hielan' Coos".

The old shedio is now Mo's dedicated painting studio and home to her extensive collection of blank canvasses. With a move toward oil paints, these will shortly be transformed and will appear on a new Etsy shop in 2017. Kath has a tiny corner of the shedio for non-clay crafty stuff for those odd 'free time' moments that she hopes to magic out of a new 28 hour day!

We are happy to discuss custom items with you. Just drop us a line with your idea or request and we can chat about what is possible.

Please do understand, though, that the ceramic process is not a quick turnaround and we will need a minimum of 4 weeks notice from when we AGREE a design (not from when you first ask us!) to the time when it could be ready to ship. So please bear this in mind, as well as possible shipping times to your location from Scotland, before making your request.

Custom items may take longer at peak times (during summer market season and in the lead up to Christmas).

Handmade pottery can still be reasonably robust, and our dinnerware and crockery IS dishwasher safe, but please do bear in mind that dishwashers are pretty hard on most things (just look at your glassware after a few wash cycles). Also, pottery does break and crack if mishandled and bumped or dropped.

So, for best results and to maintain the glossy finish of your glazed pieces, we recommend hand washing in soapy water.

Our condiment spoons are unglazed, diamond polished stoneware. Whilst the clay is fully vitrified and food safe with no glaze, we would still recommend that you do not leave the spoon in coloured sauces for extended periods, as this could lead to staining.

We are happy to discuss gift wrapping with you, and will set up a custom listing for you if this is required. Please bear in mind that our first priority in packaging will always be for the safe transit of your pottery piece.