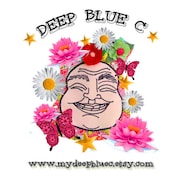 mydeepbluec is taking a short break

Custom Clothes for Rock Stars and their Kids !

Growing up in the heart of L.A. as a semi-typical Hollywood Kid, Rachel had a lot of friends in both the music and movie industries and began creating wild, one-of-a-kind clothes for a lot of them. When somebody needed something completely unique and personalized, they knew right away who to call. Rachel's business grew by word of mouth and over the years her work has appeared in Stores in L.A., Chicago, and San Francisco and on stages, in magazines, and newspapers all over the world. Now , one can find Rachel's totally unique clothing on Etsy.

Being inspired at an early age by 60's and 70's Rock and Roll, antique quilts that tell a story, and clowns in the circus, Rachel's clothes are mainly all one-of-a-kind and made especially for each person to fit their particular personality.

Rachel has lived in L.A., Chicago, Marin County, Howell, Michigan and now back home in California ! Married to Photographer / Web Designer Danny O'Connor, whom she met as a teenager standing in line for a Todd Rundgren concert at The Roxy in L.A. at the tender age of 15. Danny and Rachel have two Children; Elliott, 24, and Elmo, 18.

Rachel's motto is "Anything is Possible".

Last updated on May 10, 2022
Welcome to Rachel Culp's Mydeepbluec !
For the past 23 years I have been creating Custom Clothes for everyone from Rock Stars and their Kids..to the Kids next door.
I do all My work by hand ..and mainly do Hand Embellished Jeans, Jackets and Skirts for Adults and Children.
I love to do DIY Custom work so if You have something special in mind just send Me a message !
Most orders take 3-4 weeks from the time I recieve Your payment and measurements.
If You need something sooner just send Me a message !

Due to each piece being Custom made to Your specifications refunds and exchanges are not available.

Paypal is the prefered payment method. US Money Orders are accepted, but please note that there will be a shipping delay as the products will not be shipped until the money order has cleared.

Shipping is 6.50 via USPS Priority Mail,,Insurance is optional but recomended.

I love to hear from You so feel free to convo Me with any questions !