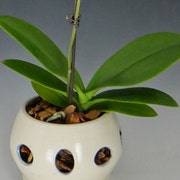 Announcement    My beads are available on my website nkpdesigns.com. See you there!

My beads are available on my website nkpdesigns.com. See you there!

I always wanted to work in ceramics. I was one of those who took a high school extra credit class and was hooked ... One day I was on the wheel making a mug but thinking about how I wanted to make a necklace later that day. I was thinking I needed some opaque semi-precious gemstones and suddenly I realized I could make opaque beads of any size, shape, and color out of my ceramic clay. Out! Of! My! Own! Clay! I was so excited!

I've had a lot of fun making beads along with the pottery since then. Oh, and the whistles? Well, I saw a book that showed how to make them and I thought, "I have to try that." So I make ceramic whistles as well. It took me weeks to make one that would toot. They are also a lot of fun to make.

P.S. I've put together a bit of information about what makes clay 'ceramic' (as opposed to 'air-dry' or 'polymer') to educate our growing community about the process of 'ceramic' pottery. Enjoy!

If a clay can go through these six stages, it may be called 'ceramic':

Note:
Bisque firing usually is done at about 1730⁰F (945⁰C), after the ware has sintered but is still porous and not yet vitrified. This allows wet, raw glazes to adhere to the pottery without it disintegrating.

Sixth Stage: Vitrification and Maturity
Vitrification is a gradual process during which the materials that melt most easily do so, dissolving and filling in the spaces between the more refractory particles. The melted materials promote further melting, as well as compacting and strengthening the clay body.

It is also during this stage that mullite (aluminum silicate) is formed. These are long, needle-like crystals which acts as binders, knitting and strengthening the clay body even further.

It is also imperative to note that different clays mature at different temperatures, depending on their composition. A red earthenware contains a large amount of iron which acts as a flux. An earthenware clay body can fire to maturity at about 1830⁰F (1000⁰C) and can melt at 2280⁰F (1250⁰C). On the other hand, a porcelain body made of pure kaolin might not mature until about 2500⁰F (1390⁰C) and not melt until over 3270⁰F (1800⁰C).

See this Seller Handbook article for a sample privacy policy you can customize for your shop.
If you ship to the EU or offer your listings to buyers there, you're required to have a GDPR-compliant privacy policy by 25 May, 2018.
Privacy policy
At NKPDESIGNS I care about your privacy and want to be compliant under the new GDPR Law introduced in the EU on the 25th of May.

I have taken steps to make sure your personal data is safe and secure. In line with the new law I only keep your personal data for the length of time as is necessary for processing of orders and for my own tax record.
Etsy prohibits the use of buyer information for unsolicited messages. See our Privacy Policy for more info.