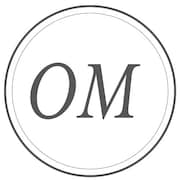 Announcement    Welcome! Olive Manna has been around since 2007 with the best in commercial and handmade packaging, craft supplies and home decor. Please let me know if you're interested in custom, wholesale, or collaboration.

Welcome! Olive Manna has been around since 2007 with the best in commercial and handmade packaging, craft supplies and home decor. Please let me know if you're interested in custom, wholesale, or collaboration.

Olive Manna was born while I was pregnant with twin girls in the summer of 2007. I had been a freelance web designer, but it was clear this wasn't something I could personally keep up with if I had little ones running around all day.

It was at the same time that I had friends encouraging me to sell the seamless pattern images I had been creating for my own website backgrounds. I offered a few for sale and it amazed me how many people wanted them.

As word got out, people began asking for stationery and other products using these designs on them. So in 2008-2009 I slowly shifted over into physical (non-downloadable) products like note cards, journals, and eventually even fabric.

Word spread again and folks asked for more. In 2009 they wanted baker's twine and anything made with kraft paper. So 2009-2011 was spent making everything I could come up with, and curating a few select twines and ribbons that fit my standards for aesthetics and quality.

We also added vintage items around that time, particularly our blue Ball jars, which are native to our local area and difficult to find anywhere else.

Then, in 2011 I slowly brought in other home decor outside of Etsy to round out the growing brand. New items included wire baskets, cake stands, and other beautiful, functional home decor and storage, as well as a whole new line of SOLID baker's twine, which was totally new and exclusive to us at that time--we started that one!

I've also been an avid knitter since my English grandmother brought it to my fingers in the 80s. I have always made gifts for friends and family, but in 2012-2013 I began offering a few select pieces to the public.

In 2014 we opened a small brick & mortar shop in southern Indiana in a sort of co-op with a few other talented makers. Thank you for your continued support and please let me know if I can help in any way, either to customize something, or even to source a product for you.

The name Olive Manna comes from a meshing of the three Jost girls' names: Olivia (Olive), Emma (M) and Audrey Anna (Anna). The biblical significance of olives and manna is important to us too.

In an effort to live up to the name, we seek to be the olive fruit by donating manna in the form of a percent of sales to Samaritan's Purse who work to rebuild communities from natural storms, political dangers and religious persecution around the world.