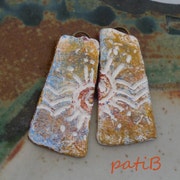 Paintings, Wearable Art and Other Treasures

patibannister is taking a short break

Reorganizing my approach Back in about a month

I inherited wanderlust from my parents. When I married, it was only natural I should marry another vagabond. I’ve lived “all over” the United States as well as Europe and Asia.
The first third of my career to date was spent mostly in advertising as a visual conceptualist. The next third was spent mostly in other fields of design: furniture, textiles, and packaging. I finally reached a point where I could afford to work in these other fields nominally and do what I’d always hoped.
I’ve won awards in all of my areas of endeavor, including theatrical design, had work published in major periodicals, am a Seattle Art Museum invitee, and have works in private and corporate collections on three continents.
In painting as in life, I am smitten with wanderlust: I like to experiment with different mediums and “attitudes”, and seek my own happy “medium”. What my uncle, a professional artist as well, termed the artist’s thumbprint.
Several years ago, I began working seriously in polymer clay, and have found it endlessly fascinating, though my first love remains paint. Painting on polymer is almost sublime.
My favorite subjects are cats, pears and chairs...after that, almost anything round.
I am a perennial student, occasional teacher, and a grateful sojourner. For one's life's work to be one's greatest joy is a privilege beyond measure.

Last updated on May 10, 2022
Thank you so much for visiting my shop. I hope you will enjoy what you find here. I also enjoy your comments and am happy to answer your questions.

It is profoundly important to me that you take as much pleasure from your purchase of one of my pieces as I experienced creating it. If you are unhappy with your purchase for any reason I will accept its return upon receipt of undamaged piece within ten business days of your purchase/receipt, and will immediately refund your full purchase price less mailing costs.

Paypal is my preferred method of payment.