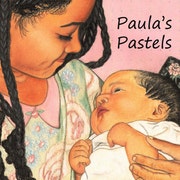 PaulasPASTELSnPRINTS is taking a short break

After graduating from college in 1991 with an associates degree in Graphic Design / Illustration, I began working at a local design company for about a year & then I became pregnant with my first child. Once the baby was born in 1993, I began making handmade crafts as decorations for the nursery & soon I began getting orders from friends & family. A couple years later, I started selling these handmade crafts at local malls & craft fairs, & although I enjoyed making these crafts, my real passion was for drawing. Since I was a little girl, I always had a love for children's books & illustrations, & it was around this time that I started drawing pastel baby portraits of my children, while I was selling my crafts outside the home.

When I first joined Etsy back in 2009, the name I chose was PaulasPASTELSnPrints. I picked that store name because most of my artwork that I was creating was being done using my favorite medium - soft chalk pastels. Around the same time that I opened my Etsy store, I purchased an "art printer" so I could make cards & prints of my artwork while at home & then sell them. This printer used 8 ink cartridges - one for each color, but it was not producing the professional quality prints that I was looking for. Also, maintaining this printer was very expensive & sometimes I would have to reprint again & again because the prints would have streaks or other flaws, even though the ink was full - it was very frustrating!

Since I had just opened my Etsy shop, I didn't want to close it, so I gave up on selling my pastel drawings as cards or prints because of my printer issues, & I returned to making handmade crafts - this time Mulberry Bird Mobiles for babies nurseries, which I sold in my Etsy store & locally. When I opened my Etsy store, I also joined another online site that allows you to use your own artwork to design different items, & then when the product sells, I would get a royalty for having my artwork used. Since I had many printer issues in the past & it was too expensive for me to operate, I am now having this same company print my artwork for me, which I use to make my cards, prints & more. This is why I am coming back to Etsy ~ I still do the artwork & designing, but I now have a printing service to use, which makes it possible for me to sell my cards & prints, as I originally planned on doing when I first opened my shop back in 2009. Also, soon I plan on taking custom orders again for the Mulberry Bird Mobiles! (see sold items for examples)