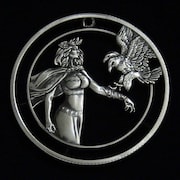 LazyCatCutCoins is taking a short break

Note from shop owner Sad to say my shop will be on break for a while. Hopefully I will have things back up and running by the holidays. Thanks much for your support. Best.

Sad to say my shop will be on break for a while. Hopefully I will have things back up and running by the holidays. Thanks much for your support. Best.

Fastest jewelers saw in the west...

My coin cutting career began when I bumped into a homeless fellow in my hometown when I was a teenager. He was cutting a crude version of "George Puffing", and I fell immediately in love (with the craft, not the man). I asked if he would teach me the craft directly, to which he gave me a solid, "No. You'd end up a bum, just like me.". So instead I followed him around for a week or so before he left town, making mental notes all the while.One by one, I gathered the tools (all the wrong ones, of course), and sat down for the most frustrating year of my life. But I endured, and after about a year I finally had something that I considered 'saleworthy', and I made my first sale. I got better from there, and the rest is history.