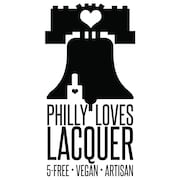 Hey folks! As you can see, we've made our way back to Etsy! We're still over on our own website, but we like to be seen in as many places as we can. Please note that rewards from phillyloveslacquer.com will not be transferrable to Etsy, and you will not receive store rewards if you shop here in the Etsy shop.

If you have any questions, please don't hesitate to send me a convo!

5-free/vegan/artisan nail polish, hand-blended in the City of Brotherly Love.

Hey folks! As you can see, we've made our way back to Etsy! We're still over on our own website, but we like to be seen in as many places as we can. Please note that rewards from phillyloveslacquer.com will not be transferrable to Etsy, and you will not receive store rewards if you shop here in the Etsy shop.

If you have any questions, please don't hesitate to send me a convo!

Painting the City of Brotherly Love in glitter.

Philly Loves Lacquer grew from an idea of a twenty-something stay at home cat mom named Esther who used to bite her nails all the time.

She then discovered the world of indie nail polish, thanks to a friend of hers with her own brand. So Esther started to paint her nails again, and then stopped biting them.

When she discovered the many groups on Facebook, she opened up a world of glitter and color that she had never even seen before. So many brands, so many colors, so little time and money.

Growing up in Philadelphia, Esther was fascinated with the history and landmarks in the city she loved, and wanted to somehow combine the two.

Thus, Philly Loves Lacquer was born. With a little push from her hubby, Esther put out her first collection, and then it was all down the happy glittery hill from there.

Philly Loves Lacquer takes its inspiration from the history, the landmarks, the sights, and the neighborhoods, that the City of Brotherly Love has to offer.

When Esther’s not in her workshop mixing up pretties for the world, she’s probably on Instagram taking pictures of food and her cats. And maybe some blogging too.