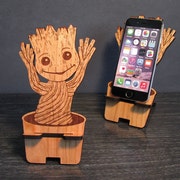 Phantastic Accessories For Your Mobile Phone

How are you? We are PhoneTastique!!

SuZanna Anna has been selling her art on Etsy since 2007. Husband Mykl has been helping behind the scenes all along while working full-time as a musician and AV dude. For a short while, Mykl Stanley had his own Etsy shop too, selling upcycled wood wall sculptures but he just didn’t have the time to put into this project.

In 2012 Mykl officially retired from all outside world jobs and started working with SuZanna full-time in their home studio. She couldn’t be more thrilled by this :-) The couple knew they wanted to try some new mediums and in August 2012 purchased a laser engraver. This allowed them to add some new products to SuZanna Anna's main shop SUZANNAANNA but they really wanted to do something brand new.

One day, while Mykl was working in the wood shop, he fashioned a couch-shaped wood thing and presented it to SuZanna Anna as her new ‘Phone Sofa’. She looked at him the way a mother would look at her child who just handed them a scribbled drawing of who knows what. This big clunky thing started to really come in handy, though. Suzanna started to watch her girlie shows on her phone while she was working on her print orders. After a while, she began to wonder how she ever lived without this thing.

Fast forward a few months, and ‘PhoneTastique’ was born. Mykl spent weeks developing the perfect stand. It is super easy to assemble and disassemble, making it simple to travel with. We think SuZanna’s designs look just PhoneTastique on these things. Hope you like them as much as we do. Thanks so much for reading all this! XO