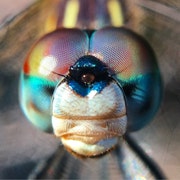 Announcement    After wandering in the wilderness for several years, the BEE-tch is back! I've brought lots of pictures of my new friends to share with you; bees, butterflies, flowers, trees and much more! Honey love and pollen kisses!

After wandering in the wilderness for several years, the BEE-tch is back! I've brought lots of pictures of my new friends to share with you; bees, butterflies, flowers, trees and much more! Honey love and pollen kisses!

An artist enamored with nature, devoted to telling its story

I was trained as an illustrator and have painted and drawn for over 20 years - on canvas, paper, ceramics and even on people's skin as a tattoo artist. I hold a BFA in Illustration from Parson's the New School for Design in New York City.

I put my camera aside in my early twenties because I didn't like taking pictures of people and as a result I didn't think I had a real talent for the medium. Regardless, I remained spellbound by everything I witnessed in the natural world throughout my adult life and always attempted to capture the things I saw with whatever camera I had on hand, I was very shy about the results but secretly I fantasized about being a nature photographer.

In December of 2013 my path as an artist changed forever when my partner gave me a tiny, clip on macro lens for my phone camera. I'd begun to take informal "portraits" of flowers around the neighborhood I lived in in CA several years prior. Moving there from Florida was a difficult and isolating experience but the flowers I found there were magnificent. they made me want to capture and share their glory and caused me to carry my digital camera everywhere I went - just in case.

I found myself wanting to get closer and closer to my subjects. The little macro lens allowed me an intimate view into a tiny world that was all around me. Soon, I began to unwittingly witness the lives of insects. I fell in love with bees and other pollinators. Seeing them so closely made me want to pull back to foster a broader appreciation for the vastly beautiful world of blooms that they inhabit - a way of thanking the plants for the sustenance and shelter they afford so many creatures. That in turn made me want to pull back further still to see the vastness of the land itself and then the water and the sky.

I moved back to Florida in 2012 and I started visiting all the parks and botanical gardens I was able to. I wanted to share the sacred beauty of the Sunshine State, the only place that has ever felt like home for me. A place so breathtakingly beautiful yet so maligned and misunderstood. A place where underground aquifers feed rainbow colored streams and tiny flowers carpet the earth. A place where the sun kisses the water and the sky spawns spectacular storms. A place where the water and plants of the sacred swamps filter out the spiritual debris and physical decay accumulated by all living things before returning their unfettered essence to the sea.


All the photos I've taken between Dec 2013 and May 2015 were taken with an iphone 4s. Then, in June of 2015, I purchased a Nikon DSLR camera - my first SLR in more than 20 years. It has been like reuniting with a best friend who you never knew you had but wished you would have realized you did all along. I know I have a lot to remember and more still to learn but the response to what I've shared so far has been so encouraging that I decided to create this site.

After seeking economic success as a painter, illustrator and tattoo artist and finding it to varying degrees, I have reached the conclusion that my success can only truly be measured in solace and the joyful revelations I am blessed to find under the boiling hot sun in a field filled with wild, tropical foliage or on the sand near the sea under awe inspiring clouds. When I spy the tiny, fuzzy face of a beautiful bee or butterfly or a flower reveals its allure to me through my lens I feel as though I've won the lottery. But my greatest happiness comes when someone else sees what I see and gets to feel that way too. I hope you enjoy my pictures.

Last updated on April 30, 2022
All photographs are copyrighted ©2018 and may not be reproduced without express permission from the artist.

All items are insured to protect against loss or damage. I do not offer refunds but I will gladly exchange or repair an item if it is flawed. I take great pride in my work!

I gladly accept all forms of Etsy Payments!

I ship via USPS about once a week. I estimate my costs based upon actual shipping charges and packing materials, though I try to recycle whenever possible. Insurance or Delivery Confirmation are included in shipping charges for all items.

Requests for custom, commissioned work are always welcome!
A 50% deposit will be requested for all custom orders. Details such as revisions and turnaround times will vary based upon the order. Convo me for details!