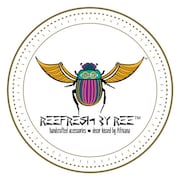 ReefreshByRee is taking a short break

Handcrafted pieces, for you, made with love! =)

The Past:
In middle school, I took a personality/career test, which concluded I would do good working in a profession utilizing my hands. Although, I was the mechanically inclined one in the home, I didn’t really know what that meant… what career field that would be. At that time, (I was 12) I wanted to be an actress on TV, like Rudy Huxtable on The Cosby Show (Keisha Knight Pulliam). As I entered my Senior Year of high school, gears shifted and I found interest in being behind the camera… Which is what I studied in college (Video Production and Photography). I’ve met people along the way that sparked the crafting bug: Meaghan, one of my college roommates, used to sew in our apartment. Watching her make quilts and little candy sacks for Halloween inspired me to want to make a shower curtain and pillows. After I graduated, I met a young man from Jamaica that crocheted these beautiful accessories, like hats and scarves. He even taught me how to crochet. From there I found myself interested in trying to make my own jewelry and upcycle/reconstruct my clothes… I’d buy books and fabric, beads and supplies because I wanted to teach myself and make things that I couldn’t find in my local shops… items that reflected me. That was about over 15 years ago. Back then it was merely an on/off hobby.

The Present:
In the beginning of 2014, I knew, ultimately, that I wouldn’t be at my job much longer. My passion was fading and they didn’t want to pay me what I was worth. The pay was steady but I wanted more... more gratification. Set aside from the video and photography, I thought of other interests that I would like to embark on… Fashion came to mind but I didn’t know exactly what… I became engulfed in watching YouTube video tutorials and reading blogs and I remember saying to myself, “I can do that!” Being totally excited, I went rummaging through my bins and suitcases of material and supplies, and was amazed to see that I had already tapped into this many years ago. It felt like it was coming full circle.
Towards the Fall of 2015, the signs kept coming to me that it was time to break out and do my own thing surrounding what I was passionate about and what kept me inspired. I saw a Steve Harvey video that was posted on Facebook where he spoke about “jumping.” I really felt as though he was speaking directly to me. March 2016, I resigned from my job and decided to build my businesses instead of someone else’s.

Since I was a child, I was innately drawn to African art and fabric, although it was scarce. Denim. Things that are a bit eccentric…Tribal. Hip Hop.
I wanted to create something that I’d love to see people wear… things that were rare for me to see growing up. Reefresh By Ree is for the person that isn’t afraid to represent who they are and/or what they appreciate, despite the mainstream agenda. They are strong, fearless and love to enjoy life.
If you want to bring a different flair to your ensemble, Reefresh By Ree will definitely revitalize!

Last updated on April 30, 2022
Thank you for visiting Reefresh By Ree! All items are handcrafted with love and genuine care! At RbR, we believe in standing out from the crowd... So get 'Reefreshed' and make a statement!

Once payment is received, items will ship.