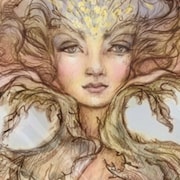 renaeleataylor is taking a short break

Note from shop owner I am on vacation till February 15 I will still try to answer messages while I am away.

I am on vacation till February 15 I will still try to answer messages while I am away.

Renae Taylor grew up believing her parents found her under a bush in the back yard.
This belief, amongst many other equally silly thoughts, helped shape her into the multi-faceted artist she is today.
Renae's work is about memory, imagination and retaining a sense of wonder in the world. It evokes the feeling that something wondrous and strange is just around the corner. Her work focuses mainly on (our) natural world, the mythological, and positive whimsical feminine imagery.
In addition to working as a freelance fantasy illustrator, accomplished doll maker and costume designer she also offers her artwork through her web site, numerous conventions, and festivals around the country.
When she is not gallivanting around the world, she resides on her farm in the beautiful Blue Ridge Mountains of Virginia. where she has horses, a donkey, goats, dogs, cats, chickens, ducks, geese, guinea fowl, peafowl and butterfly koi.
if you would like to see some of the happenings of "Cloud Crossing Farm" feel free to follow her on www.instagram.com/renae_lea_taylor


"The world always seems brighter when you've just made something that wasn't there before." ~ Neil Gaiman

"It is not children only that one feeds with fairy tales." ~ Nathan der Weise (III)

I'm nobody! Who are you?
Are you nobody, too?
Then there's a pair of us — don't tell!
They'd banish us, you know.
How dreary to be somebody!
How public, like a frog
To tell your name the livelong day
To an admiring bog!
~ Emily Dickinson

“Although the world is very full of suffering it is also full of the overcoming of it.” ~ Helen Keller

"But remember always, as I told you at first, that this is all a fairy-tale, and only fun and pretense; and, therefore, you are not to believe a word of it, even if it is true." ~ Charles Kingsley

"The creative adult is the child who has survived." ~ Ursula K. Le Guin

"It's easy to believe in magic when you're young. Anything you couldn't explain was magic then. It didn't matter if it was science or a fairy tale. Electricity and elves were both infinitely mysterious and equally possible — elves probably more so." ~ Charles de Lint

"Nothing is really work unless you would rather be doing something else." ~ James M. Barrie

Come away, O human child!
To the waters of the wild
With a faery hand in hand,
For the world's more full of weeping than you can understand.
~ William Butler Yeats

yes just email and we can discuss the options

do you make custom pices

i make custom lamps, wings, and dolls. if you are looking to commission me to do a drawing or painting feel free to email me.