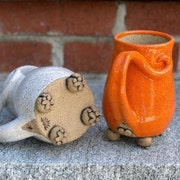 Functional stoneware pottery for the home.

Announcement    I DO NOT TAKE ORDERS.
Home of the ORIGINAL Catthole Mug!
Functional stoneware pottery hand made in a smoke free, pet friendly home studio.

Learn more about RSE at
https://www.facebook.com/risingsunearthworks/

I DO NOT TAKE ORDERS.
Home of the ORIGINAL Catthole Mug!
Functional stoneware pottery hand made in a smoke free, pet friendly home studio.

Learn more about RSE at
https://www.facebook.com/risingsunearthworks/

I have a hard time calling it "art."

I don't want my pieces to be put on a pedestal and admired. I want them to become part of a life; to be held, used and loved every day.

After receiving my BA in studio art, I never wanted to make anything ever again. So I became an Animal Control Officer.

Fast forward to us living in Las Cruces, NM with 18 month old twins, when my husband surprised me with a used wheel and kiln. After expressing my horror that he would think I even had time for that, I found myself sneaking out to the garage during naptimes to dabble in the mud once again.

In 1997 I sold my first mug for $5 to a neighbor who stopped to chat and admired what I was pulling out of my kiln.

In 1999 we moved to Rhode Island where the pottery was put on hold until 2003 when I started up Rising Sun Earthworks, named in honor of my Japanese mom who always encouraged my artistic endeavors.

I've been muddy ever since.

I accept Paypal and money orders. Items will be shipped upon receipt of Money Orders.

Items will be shipped within 72 hours of payment.

Your items will arrive wrapped in corrugated cardboard and bubble wrap, or double boxed, and shipping prices shown include this added cost.

I usually ship smaller items by USPS priority. Larger items and combined items will be shipped by UPS. If you prefer one carrier over another please convo me BEFORE paying so that I can adjust the shipping price if necessary. I can also ship by FEDEx.

I live on the east coast, so my shipping prices are calculated for worst case scenario- shipping to the west coast! I will always issue a shipping refund for any overage paid. During special sales and promotions, shipping method will be at my discretion.

INTERNATIONAL SHIPPING: I'll be happy to quote you a shipping cost to other countries.

INSURANCE: If I ship by UPS or Fedex, up to $100 of insurance is included in the shipping cost. For USPS Priority, insurance is an additional expense. If you wish to buy insurance in this case, please convo me BEFORE paying so that I can adjust the shipping price. Otherwise insurance will not be added.