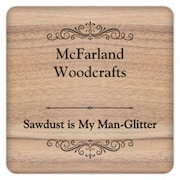 McFarland Woodcrafts: Sawdust is my Man-Glitter

Rick McFarland is a fourth-generation Arkansan. His father's side hails from Bradley County. His mother and her family were from Hardy, but moved to Hot Springs before Rick's mother was born. Rick grew up in Texas, but each summer he spent two weeks in Hot Springs, where he whiled away the hours watching his Grandpa Winstead do beautiful things with Arkansas wood. By time he was in his 30s, Rick was a dedicated student of the craft. Rick has spent the past couple of decades building furniture and honing his skills. Rick uses only wood native to Arkansas - unless he stumbles across an exotic that he can't resist! In his spare time, Rick can be found at Les Steen's Hardwoods in North Little Rock, where he and other woodworkers show off their work and tell an awful lot of tall tales.