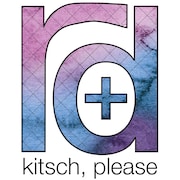 Announcement    Kitsch, please.
***click "read more" to see where you can find us on instagram and in person!***

We're putting our best sellers and new products on Etsy; please be in touch if you are looking for something particular as we have much more in stock.

Follow us on Instagram to see new items and where to find us in the NY area: @r.plus.d

Contact us for custom colors, new designs, or expired orders.

Kitsch, please.
***click "read more" to see where you can find us on instagram and in person!***

We're putting our best sellers and new products on Etsy; please be in touch if you are looking for something particular as we have much more in stock.

Follow us on Instagram to see new items and where to find us in the NY area: @r.plus.d

Contact us for custom colors, new designs, or expired orders.

R is the shop manager, designer, and printer. She has worked as a graphic designer and sold printed tea towels previously on Etsy. She came to 3D printing in a more roundabout way. D has been working in the maker movement for over a decade. They have collaborated on some projects and D often tried to convince R that they should have a 3D printer at home. Although R resisted for a long time, she agreed after D was gifted an inexpensive 3D printer. R started to learn more about how to design for it and began creating earrings. It’s moved quickly from there. R is the designer and creator of all of the items and has over 100 unique designs (and new ones daily!).

3D printing as a method of rapid prototyping allows for a lot of fun in the process—R can quickly create things that are kitschy or funny. For example, after one friend saw the Taco Tuesday design, they joked about wanting best friend pendants for her and pizza. By the next time we saw her (which was for pizza and wine) R had a new pair for her. All the items in the shop are $15 or less right now which also makes them good for gifts.

R draws on any number of things when creating earrings — popular culture, nature, friends. She likes to have fun when creating designs and doesn’t take things too seriously. She’ll make something just for a laugh (even if its just her laughing).

The biggest difference between R+D's jewelry making process and others is that a majority of the work is digital. Each piece is designed and then rendered in 3D before R will print them, making adjustments to the design as needed. It means that a design can be replicated multiple times or customize items easily.

R and D live in Sunnyside, NY, which is in Western Queens. When they moved there, they immediately fell in love with the area and the surrounding neighborhoods. Western Queens also has a lot of opportunities for small businesses and residents who are committed to supporting them.

We've done everything from logos and promotional items for businesses and non-profits, to custom pieces from drawings or handwriting samples, right down to people who want a specific shape, animal or design. Use the contact seller button or email us at hello@rplusddesigns.com for more info.

Also, watch our Instagram and website for times that we're doing custom pop-ups. We're brought our printer to do personalized bracelets and custom jewelry from kids drawings.

The material we use is a bit flexible, so it should stand up over time, but note that especially with thin lines, if you force it, it will still break. Avoid putting any of these pieces in hot places (a car in the summer, a high heat dryer, etc...) as it could deform.

You can clean any pieces with soap and water or a bit of toothpaste to remove any tarnish from metal parts.

If you decide you are done with a piece of Kitsch, Please jewelry, please remove metal pieces and compost it! Don't worry about pieces degrading while wearing; It needs to be in the right conditions (bacterial activity, heat, and churning) to do that.

Email us at hello@rplusddesigns.com to inquire about wholesale possibilities.

R+D (established 2017) is named after Rebekah and Doug (established 2006). R+D is currently owned and managed by Rebekah. R+D is a business centered around digital fabrication using sustainable resources.

Kitsch, Please is our first brand and is 3D printed jewelry. We stick to using a plant based material in our prints. In a commercial facility, it will take just 6 months for this material to be returned to soil. We keep a compost bin next to our printers to keep our process as sustainable as possible.

Hyggelig Ever After is our second brand of laser cut ornaments and wall hangings featuring local landmarks. They are all made from bamboo, a sustainable and fast growing grass.