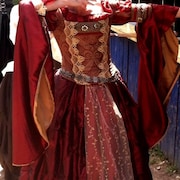 Sarlume is taking a short break

Note from shop owner I will be taking a break from making items for a while. Thank you all so much for making me so busy all of the time! This is, after all, a passion I have enjoyed sharing with all of you!

I will be taking a break from making items for a while. Thank you all so much for making me so busy all of the time! This is, after all, a passion I have enjoyed sharing with all of you!

Clothing and accessories for the like-minded of the fanciful variety.

When I was little, I played dress up. A lot. At the time, I didn't give much thought to the items that made up my impromptu costumes; an old purse worked just fine as a cape if I wore it wrong. Things change, of course, so let me tell you my tale:

~~ I love the movie Office Space. The main character plays on the hypothetical question of: "What would you do if you had a million dollars?" Naturally, the question was supposed to help you find out what you would do with yourself if you didn't need a job to pay the bills, and therefore point out your ideal career.

My answer was MUCH different from the character in the movie: I would forever get lost in the world of the arts.

Don't get me wrong though, my favorite movie ever is Labyrinth. ^_~

~~~
I am a single mother of two boys in Texas with a workroom/showroom set up in a spare bedroom of my home.
I have been known to sequester myself to this workroom, and sometimes I need to be dragged away when I'm into a project. I'll generally emerge long enough to shower and play referee/chauffeur/chef/entertainer/maid and so on.

I squeeze in the shipping and gathering of materials during brief outings, then I'll head back to my lair of curtains and wire. Sometimes I'll toss in a quick run before dinner. I'm a fitness nut.

Well, I found myself captivated with the arts early at thirteen with watercolors. Once in high school, I went through photography for three years, and touched a bit on drafting and journalism.

College directed me back toward the field after a quick stint with physics, my counselor suggesting an art major after I showed her my life size head made from Legos...

Yes, Legos. After the switch, I was much more comfortable studying art history, acrylics, and sculpting.

After starting a family, I became a stay at home mom and passed my time painting, and tinkering with some writing. Over the course of seven years, I had dappled a bit in modeling and discovered my extensive love for pencils.

During my divorce in 2008, I got a sewing machine from a pawn shop to keep my hands busy. I started out slow, trying to piece together a dress with a curtain I had, all the while keeping the curtain whole. (That way, should I fail miserably, I could take it apart and no one would know the difference. ^^;) I mostly succeeded after all was said and done, and eventually got brave enough to try making patterns through observation, trial and error.

So, while keeping us afloat with a part time waitressing job, I had eventually become good enough to start offering some of my pieces to friends to get their feedback. I got more than I bargained for when I came back with orders from friends of friends. After switching jobs again and again, I eventually found myself here; discovering the pirate, royalty, peasant, Spartan, alien, anime character, and movie hero (or villain) in as many people as I can.

I only hope I continue to grow through all endeavors I might take on, all the while providing affordable pieces of clothing or costume to anyone I can.

If your item is cancelled within one week of purchase, you will receive a full refund. After one day, you will have the option of receiving the item as ordered or a refund minus any materials purchased to make your order.

In the event you receive the item and wish to return it for a refund or exchange, I will be happy to discuss our options through convo depending on the situation. Custom items are exchanged or refunded only under extenuating circumstances.

I accept payments through any options paypal and Etsy has to offer including paypal accounts, credit cards, and e-checks.

If you order an item that you decide you wish to cancel, please contact me about the cancellation within one day after purchase.

For "ready to ship" items, I ship within three days of purchase.

I will usually ship by Priority Mail unless otherwise discussed. International shipping is available, just contact me and we can go through details regarding your order.

Items are always shipped with a delivery confirmation number, but any insurance and tracking on items will be outlined in the listing.

~~~Due to strict timing schedule necessities, the required measurements for each listing will be needed within no more than two weeks from purchase. I wish to provide your item - and items for other clients in the queue - in a timely manner, and do not have the resources to store your purchase in my queue beyond the aforementioned time frame.

I am willing to work with you on an individual basis if communication is upheld, but if there are no replies to correspondence regarding measurement needs beyond the two week deadline I will count your purchase as abandoned.

I apologize if this is inconvenient, but organization helps to keep customer service at its best. Thank you for your understanding!


~~~My corsets and other goods are available for any size where mentioned. However, orders that require being built at any waist measurement (or corresponding location) above 42 inches will be considered plus. Unfortunately, this requires more materials to make your item to the standard they must all be, so the prices on items where applicable are an additional $10 across the board.

Thank you again for understanding. ^^