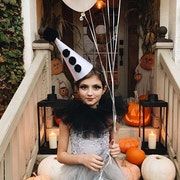 BatcakesCouture is taking a short break

Note from shop owner Thanks for a wonderful Halloween Season!
We will be back in November.

Thanks for a wonderful Halloween Season!
We will be back in November.

When it comes to sporting headwear with panache, you can't beat the British — or so says Satanica Batcakes, the Echo Park milliner known for her dramatic taxidermied hat designs. Her pieces, which feature everything from dove wings to repurposed burlesque corsetry, are perfect for the ritziest summer tea party or poshest polo match, but they're more affordable than those of Batcakes' hero, royal milliner Philip Treacy. As such, they enjoy a loyal following among those English high-society girls who appreciate Batcakes' unique balance of chic and theatrical. "One of my hats was front row at Ascot [the fanciest horse race in England] this year," she beams.

Still, her appeal isn't only in hoity-toity circles. She has a natural flair for showgirl glam that is beloved by Diablo Cody, who wore a Batcakes Couture veil when she got married last year, and high-fashion songstress Karen Elson.

Many of Batcakes' customers are intrigued by her name, although a group of Southern Baptist ladies once went so far as to cancel their order because of it. Apparently, they felt uncomfortable making out a check to the self-proclaimed bride of Beelzebub.

Satanica Batcakes was her performer name, back when she was a ring girl and fire-eater, renowned for her work with performance groups Lucha VaVoom and the Girly Freakshow. "The first headpieces I made were giant feather fans and headdresses so that I could compete in the Miss Exotic World Pageant," she says. And if you've never seen someone doing the splits on shattered glass wearing a flaming menorah hat — well, you've never seen a Satanica show.

When the burlesque craze started to fade, she moved into fashion. Batcakes was Courtney Love's personal shopper for a while — "An armed guard would pick me up and we'd go shopping," she says. But hats had always inspired her, especially the ones she saw in old movies and on the heads of "black church ladies in Philly," where she lived as a child. Her friend, red-haired Hollywood glamour girl Lenora Claire, suggested she start an online Etsy store for her hats, "because the drag queens will love them." So, two and a half years ago, she launched Batcakes Couture, selling cocktail hats, fascinators and sculptural headpieces. All of them are "color-wheel perfect, and without visible glue drops anywhere," she says, thanks to her background in puppet making.

"I thought my audience was going to be goth girls and drag queens," says Batcakes, who likes to listen to gangster rap in her hat studio. "Then everyone started asking for them in white." Now, Batcakes Couture caters to rock & roll brides the world over. Which is ironic, since she doesn't believe in marriage.

What she does believe in, though, is making a huge entrance. With brides, she explains, "Their wedding is often the one time in their life that they can really take the stage. And that's something I know all about."

Want to see the other stuff I've done for the entertainment industry?
Then go here: http://www.imdb.com/name/nm2366720/

Wanna see me doing contortion with a mouth full of live crickets? (c'mon you know you do ;)

Wanna see me in the wrestling show Lucha VaVoom wearing one of my first ever made fantastic show girl head dress with giant sparkly devil horns twirling fire?

Wanna see me play with fire all witchy-like?

And now you know everything :)

Last updated on August 18, 2020
Hi and Welcome.
I have a few store policies that are helpful for understanding the ordering process.
I get purchases out pretty quickly. Simple headbands go out within 3 days and more complicated pieces can take up to two weeks.
If you need an order by a certain date please put a note in with your order. I do my best to accommodate and will let you know if you will need a shipping upgrade.

CUSTOM WORK:
I charge more for custom work and sometimes customization of existing designs. Why? Because if I do not have something in stock to match your dress AND you need it by a certain time quickly this generally means I have to make a special trip to the Garment District in fabulous Downtown Los Angeles. I generally go once a week. If I have to make special trips or order materials quickly online I have to charge you for it.
I am willing to work with you on price and suggest alternatives within your price range.

Customization of existing designs can be anywhere from Free on up in price. Ask me. If it's a simple color change of something I have on hand it may be free. If you ask for something I have to source then the charge will be higher depending upon the materials.

You will be a part of the process! I send pictures through out the design process and for final approval.

All custom designs are to be paid for up front.

I do not refund shipping or pay for return shipping.

I accept paypal and Direct Checkout.

ATTN PHOTOGRAPHERS:
I will only consider loans of my items if you are willing to pay for all shipping through Federal Express. This means both ways. Sometimes i will require a deposit.
Contact me at sweetfireeater [!at] gmail.com and not through Etsy if you want to be considered for a short loan of my work.

ATTN Blog Writers and Reviewers:
I do not send out free items for review.

ATTN Celebrity Stylists and Big Time Party Goers:
Do not ask me for free stuff.

ATTN Everyone: Do not ask me to go down on my prices. I set my prices to be very fair as it is. I do not answer discount inquiries unless it is for at least a dozen of said item. That being said I will also gladly combine shipping on multiple orders.

•as needed to provide my services, such as when I use your information to fulfill your order, to settle disputes, or to provide customer support
•if necessary to comply with a legal obligation or court order or in connection with a legal claim, such as retaining information about your purchases if required by tax law in my state and country; and
•as necessary for the purpose of my legitimate interests, if those legitimate interests are not overridden by your rights or interests, such as 1) providing and improving my services. I use your information to provide the services you requested and in my legitimate interest to improve my services; and 2) Compliance with the Etsy Seller Policy and Terms of Use. I use your information as necessary to comply with my obligations under the Etsy Seller Policy and Terms of Use.

•Etsy. I share information with Etsy as necessary to provide you my services and comply with my obligations under both the Etsy Seller Policy and Etsy Terms of Use.
•Compliance with laws. I may collect, use, retain, and share your information if I have a good faith belief that it is reasonably necessary to: (a) respond to legal process or to government requests; (b) enforce my agreements, terms and policies; (c) prevent, investigate, and address fraud and other illegal activity, security, or technical issues; or (d) protect the rights, property, and safety of my customers, or others.

I retain your personal information only for as long as necessary to provide you with my services and as described in my Privacy Policy. However, I may also be required to retain this information to comply with my legal and regulatory obligations, to resolve disputes, and to enforce my agreements. I generally keep your data as available in my shop files.

Your rights as a buyer:

I have Google Analytics enabled in my shop. I have asked Google to retain the information for 26 months. I do not share the information received through Google unless required to for legal reasons.

- I will use your contact information (your home address, e-mail address, your telephone number, your first and last name etc.) only to send you a purchase, to communicate with you only about the purchase, and to answer your questions.

- I will not share your contact information with third parties - social networks, advertisers, consumer data resellers and service providers.

How to Contact Me
For purposes of EU data protection law, I, Kelly Kucharski, am the data controller of your personal information. If you have any questions or concerns, you may contact me at batcakes [!at] batcakes.com

ph- 520-508-2886
See this Seller Handbook article for a sample privacy policy you can customize for your shop.