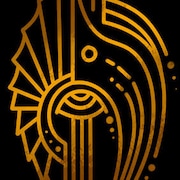 It was spring of 2009 when creating a shop became a reality. I have always been a maker. I've done everything from kite making to carpentry. Beading to incense making. Costumes to herbalism. I really don't believe in limitations and I have a desire to try anything.

So one day I was unloading some bamboo from my car. I had just decided I would try out flute making again. I had done it once before when I was a pre-teen but I lacked the tools to do a decent job.

This is when my neighbor walked up to me and said- "Hey whats all that for?"

How much? Yes something that simple. I had never considered actually selling things I had made. I stood there gaping uncertain how to respond to her. That simple comment set the wheels in motion. Next thing I knew I was signed up to vend at a festival and had opened my etsy store with a mere 4 bamboo flutes.

With this new option open I began to re-examine all the various creative endeavors I had tried over the years and attempt to sell them. Four years later here I am with one eclectic shop. Some of these crafts I have been doing since I was old enough to grab a tool. Others are newer experiments.

Whatever I do and wherever I go with it. I will always have my unmistakable style thats all mine.

Last updated on May 18, 2022
Currently an on commission based only. Check my past sales for what I can do!

Sales on consumables (incense, oils, etc ) are final. Flute sales are final. Mask sales are unfortunately final. If you have a question about fit I will gladly help you in any way I can. I will accept returns on certain other items depending upon the reason. Return shipping is the buyers responsibility. Please contact me before arranging a return.

Paypal payments will ship asap provided they are going to a confirmed address. Unconfirmed will be delayed up to 3 days awaiting deposit.

All items are shipped via United States Postal Service or UPS for larger more expensive orders and the items are well packaged. Shipping is combined. On occasion due to the variety of items in my store the total shipping price ends up more than the actual shipping. I happily refund the shipping overages when this happens.

I will gladly take custom orders! Please contact me or browse through http://savagedryad.deviantart.com to see what else I can do!

Custom order Policy- Half down on custom work to get me started and the remainder when your item if finished.