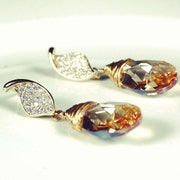 SimplySleek is taking a short break

In my late teens I became a self-taught handcrafted jeweler. I was inspired by a family friend. My mother made me go to a jewelry party at an Aunt's house with her.
I really did not want to go but she was the boss. So, there I was in a in a chair amongst a bunch of their lady friends...a bored teenager, as they "Ooo and Ahh'd" over her friend's handcrafted jewelry.
When I finally stopped pouting, and looked around the jewelry was actually very pretty. From that moment on I was hooked. I started asking my Mom's friend question after question; little did she know she had just opened a door for me.
Years later Simply Sleek opened shop, the first day of 2011 to be exact. But, I can really say now I appreciated that "light bulb moment".

Last updated on November 10, 2014
Hello and welcome to my Etsy shop! I hope you find something you love. I appreciate design ideas, questions, and comments. I will be delighted to make you something beautiful for you.

NO refunds on custom orders. I cannot accept returns on earrings for sanitary reasons. All other exchanges or refunds must occur within 10 days. The item must be received in its original condition and shipping charges cannot be refunded.

I accept online payment through PayPal only. An account is not requried to pay by check, debit or credit card through PayPal. A full payment must be received and cleared before any order is shipped. Payments are expected immediately upon checkout.
Transactions not completed within 48 hours are cancelled and the items is relisted and appropriate feedback is left. If you would like to cancel within 48 hours contact me no negative feedback will be posted.

In stock orders will be shipped within 3 to 4 business days or less of cleared payment. If payment clears on a weekend or holiday orders will ship the following business day.