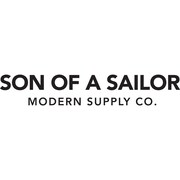 Announcement    We are William Knopp and Jessica Tata, the husband and wife team behind Son of a Sailor. The birth of the brand is inextricably tied to our own relationship—Son of a Sailor was the organic result of the two of us joining forces to create items for a well designed life. We remain focused on the story behind the designs.
→ follow us on Instagram! @sonofasailor
→ check out our website! sonofasailor.co

We are William Knopp and Jessica Tata, the husband and wife team behind Son of a Sailor. The birth of the brand is inextricably tied to our own relationship—Son of a Sailor was the organic result of the two of us joining forces to create items for a well designed life. We remain focused on the story behind the designs.
→ follow us on Instagram! @sonofasailor
→ check out our website! sonofasailor.co

Son of a Sailor is the embodiment of playful collaboration between a husband and wife.

Son of a Sailor is the result of William and Jessica, husband and wife, and their delight and exploration of creative process. They volley ideas back and forth, each helping to craft and form every item that they create.

William and Jessica met while she was living in San Francisco and he in Austin. She was originally from Austin, but had been in the Bay Area for a couple of years. William traveled to the Bay Area to visit a friend, her roommate, and they immediately hit it off. The first day spent together they ended up doing art projects on the floor of her room! After that trip, they began dating long distance. Every time they would have a visit, they ended up creating something together.

Ten months later, Jessica returned to Austin. Together, in the scope of a year, they bought a house, began Son of a Sailor, and became engaged to be married. It's clear they like to do everything at once.

Last updated on May 9, 2022
Welcome to Son of a Sailor Jewelry! We're excited to share our handmade items with you.

All items are made by us, William + Jessica, with care and great detail. Please keep in mind that no two handmade items will be exactly alike. There will be slight differences, as much as we try to remain consistent.

Son of a Sailor items are made to order. While we keep stock of many favorites, items may take some time to create. Please allow 1 - 3 business days for jewelry to ship and 3 - 5 business days for supply goods. If you want to know if a specific item is in stock or if you have a deadline in mind, please email us at hi.there [!at] sonofasailor.co.

If you are not pleased with your item, please let us know so that we may do our best to make you happy!

Son of a Sailor accepts returns on most new, unused items within 14 days of delivery for a full refund, less the cost of shipping. Son of a Sailor is not responsible for item loss or damage in-transit. We recommend shipping items with delivery confirmation to avoid issues. When returning, please repackage items with care to avoid damage en route.

Returns and exchanges may incur additional shipping charges. Please note that colors may look different on the screen than they do in person.

If you would like to return an item, please contact us with your order number and details about the product you would like to return. We will respond quickly with instructions for how to return items from your order. Please make sure merchandise is packaged to protect the paint, varnish, and any other substrate that may be damaged in shipping. If an item is returned to us for a refund that is not new, appears used, or is damaged, a refund may not be possible. A percentage of the original price may be forfeited, or a return denied entirely. Son of a Sailor is not liable for any shipping charges, this includes any that may be necessary to send back an item, in the event that it is not returnable.
If your item arrives damaged, please provide photographs of the packaging and the damaged item. Son of a Sailor is unable to assist in filing an insurance claim without proper documentation of the package. Notify us immediately so that we can work to resolve the issue as quickly as we can.
Please feel free to convo us with any questions regarding our policies.

Son of a Sailor Jewelry currently only accepts direct checkout as a method of payment.

Payment must be made within three days of purchase, otherwise the sale will be cancelled. If you must cancel a sale, please let us know and we will do it ASAP.

Items will be shipped from our Austin, Texas studio within 1-3 business days for jewelry, 3-5 business days for lifestyle accessories. Please allow additional time for items with a longer lead-time indicated in the product listing. If you require special insurance, priority delivery, or gift-wrapping, please convo us! We're happy to accommodate your needs!

Son of a Sailor’s standard shipping is USPS First Class Mail. USPS Priority, UPS, and FedEx shipping is also available at an additional cost. If the shipping option you desire is not shown, please don’t hesitate to contact us to make arrangements.

Shipping rates for many of our items are weight-based. The weight of any such item can typically be found on its detail page. To reflect the policies of the shipping companies we use, all weights will be rounded up to the next full pound.

All items shipped via USPS include insurance. Son of a Sailor is not responsible for delays, damage or loss. We will do our best to ensure the arrival of your package and send tracking information accordingly. If your package arrives damaged, please save the packaging and photo document the incident upon arrival so that an insurance claim may be processed.
You will receive an email from Etsy once your item has shipped.

A customs form that states the full value of the item(s) you’re purchasing will accompany international orders. Please note that your country may levy duties, taxes, and/or customs charges for your purchase. Son of a Sailor is not responsible for any import charges your country may impose, nor will we misrepresent what we are shipping to you. International buyers are responsible for bringing any packaging requirements specific to their country to Son of a Sailor’s attention.

When shipping international orders via the US Postal Service we are unable to track your package once it leaves the United States. Additionally, insurance claims for USPS International shipments can be difficult or impossible to collect on. We recommend selecting UPS or FedEx as your courier service, as they provide tracking for international packages, and have more reliable insurance claim processes.

|| PACKAGING ||
Jewelry items are shipped in a Priority Mail Flat Rate Small Box. If you would like your item(s) gift wrapped, please convo us! We're happy to accommodate your needs!

|| WHOLESALE ||
Son of a Sailor is happy to fulfill wholesale orders. Please convo us with your specific interestes, and we'll be happy to give you more information about our line.

|| SPECIAL REQUESTS ||
We are happy to talk with customers about special requests. If you need multiple quantities of an item, or are looking for something in particular, please don't hesitate to ask!

Thank you so much for visiting Son of a Sailor!