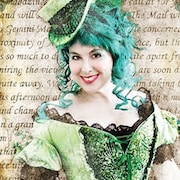 SparkleyJem is taking a short break

Jema trained at Nottingham Trent University in the United Kingdom. She has a BA (hons) in Theatrical Design and it was while creating gorgeous costumes and accessories for theatre and film that her love of vintage style started to get out of control!

Her designs incorporate vintage and found objects with polymer clay, filigree and fabric and her workshops encompass millinery and corsetry techniques as well as jewellery pieces. Her work is exhibited in museums and galleries across the country and she has a large international fan base among the Steampunk and altered art communities.

Miss Emilly Ladybird, Adventuress, is Jema’s steampunk alter ego. In the character of Emilly she travels the world searching out artefacts for her employers “Dickens and Rivett”.sh e is much in demand as a speaker and panellist at craft, sci-fi and steampunk conventions across the country, also demonstrating and leading workshops on alternative style.

Jema/Emilly has been featured in several steampunk history and lifestyle books, including “The Steampunk Bible “ (Abrams 2012) and “Steampunk an illustrated history” (voyageur 2012)

She regularly writes articles on steampunk and vintage style for “making Jewellery magazine”, “making” magazine and has presented projects on Bead TV and Craft EDU

Her costumes have formed the central focus of Steampunk exhibitions at at Kewbridge steam museum, Bradford Industrial museum and Foxlowe Arts centre

She has created several costume pieces for the Longitude Punk'd exhibition, a whimsical 18th centuary orrery gown, headress and wig, to be displayed on a specially sculpted mannequin, and a steampunk recreation of captain cooks uniform, complete with hat and chelengk. Photographs of these pieces have been used in the exhibition publicity.

Last updated on May 9, 2022
hello and welcome to my etsy store, I hope you find something wonderful here!

Paypal only for listed items. Expensive custom pieces may be ordered using other payment methods, please contact for details.

All readymade pieces will be dispatched first class or airmail, with proof of postage within seven days. Custommade orders will be in the post between 4-6 weeks unless it is a complex order and has been agreed otherwise. If you need your purchase urgently, just let me know and i will do my utmost!

If your purchase is a gift going direct to another adress, and you would like a card included for no extra cost, please do ask.