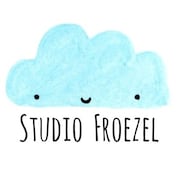 StudioFroezel is taking a short break

What do you get when you mix a translator with a bad sense of humour with some watercolours, ceramics and a bunch of bad puns? You get Studio Froezel.

Until the age of 22, I was utterly convinced froezel was a word. A froezel (pronounced froo-zel in English) was the Dutch word for ruffle, an embellishment. Until one day I had to look it up, and realised the word my mother had been using all my life wasn't actually real!

My biggest inspirations are my friends. They're the one who encouraged me to start Studio Froezel in the first place, and many of the products I make were first made as a gift to them, or because they needed a gift for someone else. They also share my dorky sense of humour, which is a great plus.

I get my best ideas while waiting (in waiting rooms, on hold on the phone, waiting for friends to show up because I am usually ridiculously early) or procrastinating (ignoring the pile of laundry that needs to be folded, doodling while I ponder over a hard sentence during my job as a translator, or about 2 hours after my bedtime).

All items are illustrated by hand, wrapped and shipped by me.

Last updated on May 9, 2022
Welcome to Studio Froezel. Take some time to read all the boring information so you can make an informed purchase, okay?

If there are any issues with your order, please contact me and we'll work something out!

Items that are broken in transit will be refunded (or we can discuss replacement options).

Custom items cannot be returned. No matter how cute your pet or partner is or how funny your inside joke is, a custom item probably won't appeal to anyone else.

Please note that buyers are responsible for any and all duties and customs charges that may be incurred.

Holiday Deadlines:
Europe: 9 December
The Netherlands: 17 December
(Due to the global pandemic, Studio Froezel is currently not shipping outside of Europe.)

Please note that due to the global pandemic, shipping delays can occur!

All cards come with an envelope. All ceramics are gift-wrapped.

Please keep in mind that items are shipped from The Netherlands, so it may take longer than you are used to to receive items. I will ship your package as soon as possible, at the cheapest rate possible. All purchases are shipped after the payment has come through. Packages will be shipped via the Dutch Postal Service via Standard Priority.

Packages are sent without track and trace to keep shipping affordable and honestly, because the Dutch postal system is a tragedy and it doesn't really work. If you want tracking or other fancy postal options, please send me a message beforehand and we'll go through options together.

Please note that if your shipping address is outside of the EU then you may be subject to Customs Duty or handling fees.

I will let you know when items have been shipped and give you an estimation on how long it will take to get to you. I am terribly sorry for any delays or slow shipping due to restrictions and customs of your country.

I try to recycle and reuse packing materials to spare the environment and keep shipping costs down.

If the item is a gift and being shipped directly to the recipient, please let me know. It is also possible to add a personalised message.

If your specific country isn't listed and you want to know how long a package will take to get to your country, please don't hesitate to contact me.

This Privacy Policy describes how and when I collect, use, and share information when you purchase an item from me, contact me, or otherwise use my services through Etsy.com or its related sites and services.

I do not store your personal information outside of the Etsy seller website. If you want your information changed or deleted, please contact Etsy directly. If you have any concerns, please send me an Etsy conversation through the Etsy shop conversations.

Information Sharing and Disclosure:
Information about my customers is important to my business. I share your personal information for very limited reasons and in limited circumstances, as follows:
-Etsy. I share information with Etsy as necessary to provide you my services and comply with my obligations under both the Etsy Seller Policy and Etsy Terms of Use.
-Compliance with laws. I may collect, use, retain, and share your information if I have a good faith belief that it is reasonably necessary to: (a) respond to legal process or to government requests; (b) enforce my agreements, terms and policies; (c) prevent, investigate, and address fraud and other illegal activity, security, or technical issues; or (d) protect the rights, property, and safety of my customers, or others.

Data Retention
I retain your personal information only for as long as necessary to provide you with my services and as described in my Privacy Policy. However, I may also be required to retain this information to comply with my legal and regulatory obligations, to resolve disputes, and to enforce my agreements.
See this Seller Handbook article for a sample privacy policy you can customize for your shop.