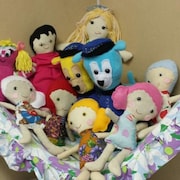 TawnyBee is taking a short break

Note from shop owner Tawny Bee is on vacation! See you all in the summer!!

Tawny Bee is on vacation! See you all in the summer!!

It all started with a stuffed penguin...

It was 2008. I was in the throws of some serious pregnancy hormones (although I didn't know it yet). Nesting had kicked in big time and I was busy sewing and baking up a storm.

I wanted to bring a smile to my husband's face, so I created Tux the Linux Penguin for him to bring to work. I gotta say - that little penguin was the cutest!

And A LOT of people thought so. One of my best friend's in the whole world said, "You should sell those on Etsy."

Etsy? What is Etsy?

I looked it up and found an entire community of makers like myself.

Then I listed some other stuff I had been making.

Then I had a baby.

Then I listed stuff that the baby liked.

Then I listed stuff that the baby's big brother liked.

Then I got married.

Then I listed stuff that I liked.

I also listed stuff that neighbours and friends liked when the mood struck me.

And sometimes I even listed stuff that my husband liked...

Last updated on July 6, 2013
Welcome to Tawny Bee. Whenever possible I like to concentrate on using upcycled and eco-friendly supplies while making my products. I'm a happy earth mama and would like to share my craft with you :D

Returns are accepted as long as the item is in resale condition and shipped back to me at the purchaser's expense. A refund on the original price of the item (minus Etsy and Paypal fees) will be issued if item is found in good condition when it arrives back to me.

Returns are not accepted on intimate items such as mama cloth and potty trainers for obvious reasons.

Payment for an order is expected immediately. If for some reason, you want to delay payment, please message me. I will not ship until full payment is deposited in my PayPal account.

I will cancel an order if I don't receive payment one week after purchase.

I use Canada Post to ship all of my items. I always ship using the most economical method. If you would like confirmation or express shipping, please message me and I'll get back to you with a quote.

I mark all international orders as a "gift". This helps ensure that the package will move through customs quicker.

I use recycled materials whenever possible to package my items.

I would love to hear from independent handmade-loving stores looking for awesome eco-friendly items on their shelves.

If you see an item in my shop, but want it in another style, colour, size, etc, I would love to hear from you. A custom order request can be made in this instance.