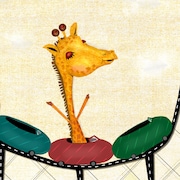 thedreamygiraffe is taking a short break

Note from shop owner The Dreamy Giraffe is closed for the rest of 2022. Have a wonderful rest-of-the-year and holiday season!

The Dreamy Giraffe is closed for the rest of 2022. Have a wonderful rest-of-the-year and holiday season!

There was a little girl who told everyone who would listen, "I'm going to be a writer when I grow up!"

Writing books was all she ever wanted to do.

She'd been artsy and crafty and generally creative all her life...but was she an artist? No way. No how. She doodled. She scribbled. She made things. She liked drawing. But she never felt like art was "her thing".

Then, when she was in her twenties, she picked up a paintbrush.

She started out painting big eyed girls that were slightly sad, because she was a little bit brokenhearted and very unhappy in her job.

Even though she got super busy making both art AND a dream she didn't even know she had come true, writing was still a huge part of who she was, so she wrote little stories to go along with her paintings and she even started incorporating things she wrote INTO the paintings.

As she went along, though she loved the big eyed world she was creating, everyday she made lists of other artsy things she wanted to try "someday".

One day, she woke up and decided life was too short to keep waiting for a "someday" off in the distance to do all the other creative things she really wanted to try...and so she branched out to doing other types of art, including illustrations done digitally (using a mouse instead of a paintbrush!) and typographic work where she found she could turn her poetry and other writings into pieces of art all on their own.

This artist writer girl had learned that life could be tough and there will be jobs and boys and myriad other things that will make you sad. That lots of times we can't control the bad things that happen to us. But what we can control is what we ourselves give. And so through her art and writing, she wanted to spread as much happiness, sunshine, positivity and good as she could.

They say art imitates life...but she wanted to make art that celebrates life.

So that's just what she did.

And, of course, she pretty much lived happily ever after.

(Much gratitude to Jana E. Pye for the lovely photographs of the Sweet Smiles figurines!)

Can you rush my order/deliver by a certain date?

Within the United States, your package will usually arrive within one week after shipping (many times much quicker!). Prints shipped outside the country can take quite a bit longer and there may be delays due to customs, so please consider this if you need your order in a hurry.

If you need your art for a specific event or an occasion, please place your order well in advance.

Do you offer other products or other size prints? Gift wrapping? Framed prints or framing services?

❤ I only sell the one size (8.5" x 11") print listed in my shop. I am unable to sell larger or smaller prints, already framed art, or other products featuring my art. I apologize for any inconvenience.

❤ I do not offer gift wrapping services, but if you are shipping a print directly to someone else as a gift, I will be happy to include a note from you to them. Just let me know what you'd like it to say!

❤ PREFER TO PRINT YOUR OWN? Digital printables (in JPEG or PDF format) ARE available for most pieces upon request. Please just ask!

Do prints ship from an animal-free and/or smoke-free environment?

My home, office and I are all smoke-free.

Will I be charged sales tax?

All South Carolina residents will be charged the applicable sales tax.

I see you ship USPS First Class. Can you use another method to ship my package?

I have found that for my prints, First Class typically arrives just as quickly as Priority, but if you'd prefer your package ship Priority, please just contact me before purchasing and I can do that. I do not offer any other upgrades (such as overnight/express) or use any other shipping companies (such as UPS or FedEx) at this time.

All prints will ship in a protective sleeve within a rigid mailer to prevent bending and damage.

What is the best/easiest way to frame and/or display your prints?

I have a HUGE list of easy & affordable framing/display tips, tricks & suggestions. If you'd like this, please just contact me and I'll get it to you!